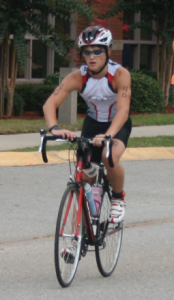 “Why don’t you practice some more in the driveway?” I asked.

“I’ll be fine.  It’s not that hard,” my 15 year-old son Miles replied.  Anyone with a teenager would have recognized that special teenager tone of voice which implied I didn’t know anything.

It was early summer 2013, and Miles was about to head out on a bike ride. This wasn’t his first bike ride, of course. He’d been riding bikes around the yard and neighborhood for years.  He was, however, fairly new to road cycling where you squeeze into tight fitting spandex clothes and zip around the open roads a la Tour de France style.

Now, after just a few months of road cycling, we’d finally ditched the standard bike pedals and bought him the clip-in pedals and cleat shoes setup. He was one step closer to being legit with the older cyclists he’d been getting to know.   With clipped-in shoes, though, if you come to a stop and forget to kick out your foot to unclip and catch yourself, you fall over.  It is embarrassing and painful.  Trust me.  I wrote about my experience with that here.

After just a few minutes of practicing clipping in and out in the driveway, Miles felt like it was time to hit the road.  His mother and I still weren’t totally comfortable with him riding for hours and hours around Lexington County, and the new pedals gave us one more concern for his safety.

Miles heading up the driveway, and I yelled after him, “Call if you need me!”

“I unclipped one foot and leaned the other way.” Ouch, I thought to myself.

“And the chain came off?”

“Please be careful,” I told him. ” And unclip both feet until you get the hang of it.”

“Alright. Bye.”  I did not hear that same “your a moron, Dad” tone as before.

I think after that day, Miles may have fallen once more, but he got the hang of it. By the end of summer, he seemed to be a pretty good cyclist. Even on his entry level aluminum road bike, he could go long distances at decent speeds with experienced older cyclists in the area.

He’d taken up swimming as well, and in late July, he entered his first triathlon.  He finished first out of six in his age group.  Much like after his first place age group medal in his first 5K race at age 11, he was hooked.

Time marched on and one parent grew more and more comfortable with Miles cycling on the open roads.  So much so, he didn’t think about it much at all anymore.

To be continued….Click here for part two.

5 thoughts on “Tragedy and Triumph Part 1: The Prologue”