This is part two in a series.  For part one, click here.

We upgraded Miles’s bike shortly after that first triathlon in 2013, and he rode hundreds, if not thousands, of miles over the next 18 months. When he wore out the first set of tires, I was shocked how replacement tires for a bicycle cost more than tires for my car and certainly didn’t last as long. He continued to swim and, of course, run, but cycling was his favorite of the triathlon pieces.

I had a bike, too, and occasionally rode with him.  Like running together, my pace was too slow and he’d have to stop often to let me catch up.  My wife, Angie, still worried about him cycling on the busy roads, but by riding myself, I had grown comfortable and rarely gave his riding much thought.

Miles was becoming a serious triathlete and was approaching the level where the competition has much better (and more expensive!) equipment, to some degree buying higher race finishes. He had pressed for yet another, more high tech bike to keep up with the Joneses, but we compromised on just a newer helmet, one that was supposedly more aerodynamic. Online, it looked more red than it turned out to be.  I’d call it coral.  We could certainly easily pick him out of a crowd.

Year of the Tri

2015 was going to be the Year of the Tri for Miles. He had some lofty goals, and I knew he would put in the training time.  Would it be the right training? That did concern me. I certainly wasn’t capable of coaching him in this triathlon world.  As an endurance athlete with a passion for marathons, I understood his need and desire to put in long hours, but even to me, his workouts seemed excessive. I looked on the bright side, though – he could have been into worse activities.

As parents, Angie and I wanted to see him improve and reach his goals. A friend recommended we meet with his former triathlon coach. After the meeting, we decided personal coaching was a good idea, and Miles embarked on a new training regimen under the coach’s direction.

They discussed improvement goals for each triathlon discipline, and we targeted nine triathlons for 2015.  In his mind, Miles had one season to attract the attention of the few college triathlon programs that treat the sport as varsity, not just club.

If you’ve ever attempted to make a change, you know that sometimes positive results aren’t immediate.  Adults tend to know this. Teenagers not so much, though. After a couple of months of different workouts and three triathlons completed, it was the middle of May and Miles was frustrated.  Each of three events had some steps forward, but they also had some steps backwards.  He had yet to have an all-around good race, and the one podium second place he found was more a fluke of entrant categories, not a reward for performance.

Just after I pass Lexington High School on my commute home, the speed limit on Highway 1 increases to 55 mph, and I spend the last few minutes of my ride enjoying the rural scenes of Lexington County.  There’s even an occasional tractor to slow me down.

On Tuesday, May 19th, I was able to leave work early.  I reached this stretch of country bliss and was just about to crank up the radio and put the pedal to the floor. (OK, not really.  I drive slow, just like my bike riding). Instead, though, traffic came to a crawl, and I saw some emergency vehicle lights ahead. I was nearing a spot with no traffic light where drivers must cross two lanes of 55 mph traffic to turn left out of a subdivision. Great, I thought. Another person has been t-boned pulling out.

A few seconds later, I saw it was an ambulance blocking my lane.  Now very close to the dangerous intersection. I could see a bicycle on the ground, just off the road.  Oh no. Hope it is no one I know, I said to myself.  I looked a little farther up the road and could see a group of people standing over a cyclist laid out on the pavement – with a bright coral helmet.

I think my heart skipped a beat.  Immediately, I pulled over into the grass and ran to Miles’s side. His face, right arm, and right leg were bloody. A women was kneeling at his head, holding his neck still, while the EMTs were unloading equipment from the back of the ambulance.Turns out, she was a nurse and one of the first people on the scene.  As a matter of fact, two nurses stopped to help.

I talked to Miles and he recognized me.  He could tell me my name, his name and some other facts.  He could also move his arms and legs, a huge relief.  However, he complained about a headache and left shoulder pain. 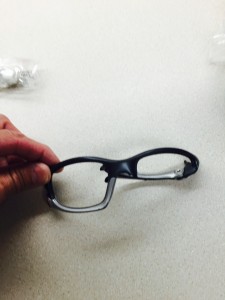 Miles asked what happened.  I wanted to know, too. We were told a car pulled out of the neighborhood hitting Miles as he passed. Thankfully, the driver called 911.

Someone handed me his mutilated sunglasses.  Both lenses and one temple were gone.  Based on the blood and the condition of the glasses, it appeared his face took the brunt of the impact to the car.  We later looked at his GPS watch stats on the Garmin website and saw he was going 25 mph at impact.

I looked up and saw my mother-in-law standing nearby.  On her way home, too, she’d driven up on the accident just before me. She called Angie to give her the news.

Miles asked what happened again.  I repeated what I knew. Then he asked if he’d asked that before. When I said yes, he said, “I’m definitely concussed.”  I guess he paid attention in health science class.

The EMTs carefully placed Miles onto a back board and loaded him into the ambulance.  They told me they were taking him to Palmetto Richland. That wasn’t the closest hospital or even in my county. I didn’t understand, but I didn’t question. I watched them drive off, and then I talked to some of the bystanders to get a better idea of what happened.

When Angie arrived, I made the mistake of showing the destroyed sunglasses to her. She’d held it together on the short ride from our house to the scene, but my blunder pushed the wrong button. She broke down in my arms. At this point, a neighbor of ours appeared from nowhere and insisted on driving Angie to the hospital.  We agreed, and I stayed behind to speak to the highway patrol. 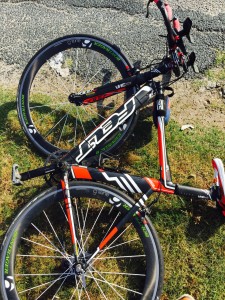 While waiting on the highway patrol, I had time to examine the bicycle. The impact was so hard, the aluminum bicycle had broken in two, snapping the weld spot where the crossbar/top tube and down tube meet the front tube.  It looked like we would be getting that new bike sooner than planned.

After talking to the patrolman, I loaded the wreckage into the back of our SUV and headed to the hospital.  I prayed it wasn’t the case, but I had a great fear Year of the Tri had just come to an untimely end.

To be continued….Click here for part three.