This is part four of the Tragedy and Triumph story series (It will end, I promise!).  Here are the  links to the previous posts:

On to part four:

If you recall, the original Year of the Tri plan included nine events.  During his recovery, Miles missed two of these.  Now, after being cleared to train again, there were eight days until the next scheduled triathlon, Tri the Midlands.  We never really considered attempting this one, though.  It had a fairly long open water swim and would likely be too much too early on the recovered shoulder.  Besides, eight days just wasn’t enough time to get back in shape, even for a 17 year-old. Miles accepted missing out on the third event pretty well, but we did go watch. It is good to learn from outside the ropes every now and then, too.

We targeted the July 11th Swamp Rabbit Triathlon in Greenville, SC for the return to competition.  Miles had been entering the Open division in his triathlons, meaning he felt he was competitive enough to race against the top athletes for the overall win. For his return, though, I registered him in his age group category. We (or at least I) felt like competing age group would be a better way to ease back into competition.

Miles ramped up his training over the course of about two weeks after the doctor’s clearance.  Then, on June 29th, he and his coach went back to the regularly scheduled programming. He had two weeks until the Swamp Rabbit Tri.

The triathlon is one of the worst spectator sports.  In most races, you can at least see the entire swim portion. In open water swims, the athletes go off in group waves.  For pool swims, they line up by swim speed ability (in theory) and  then take off every 20-30 seconds, navigating the lanes of the pool by crossing under the ropes at the end of the lanes.

Eventually, they reappear and cross the finish line.  For an approximately one hour sprint distance triathlon, we usually see Miles less than ten minutes and most of that is during the swim. It is the rare venue with loops where you at least catch a glimpse of athletes mid-bike or mid-run. 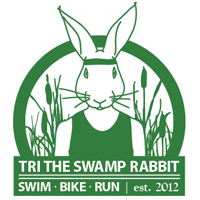 The Swamp Rabbit Tri (or Tri the Swamp Rabbit as they call it) is held on and around the Furman University campus in Greenville, SC.  The swim portion of the Swamp Rabbit is a 250 meter pool swim. This is the shortest  swim I’ve seen for a triathlon, which made me happy.  I was worried about the shoulder injury, despite no problems in practice. I figured if he had a problem, at least he’d be in a pool, not open water.

We arrived at Furman on Friday, July 10th, for packet pickup and to scope out the course.  If possible, we always drive the bike and run routes the day before a race.  Sometimes, course markings on race day can be a little suspect.

At packet pickup, we learned Miles was not allowed to compete as an age grouper.  He had to go Open division, since he competed at that level in pre-accident events.  I wanted to argue with them and say “Look, we’re not trying scam you.  He was hit by a car and couldn’t train for a month.  We don’t think he’s ready for Open division right  now.”  But I didn’t.  I did try to tell him there was no pressure and this race was just about getting back in the game.

We then drove the bicycle route through the country side and town of Travelers Rest.  A couple of spots seemed tricky, and I just hoped officials had it well-marked for the race.  We had a nice dinner with some friends and headed back to the hotel for an early bed time.  Race morning alarms come awfully early.

Miles has decided he needs about an hour and thirty minutes to get prepared for races, so we arrived shortly before 6:00 a.m. for the 7:30 a.m. start.  I suppose these things start so early to beat the heat of summer and perhaps avoid some traffic. After checking in, organizing his transition area, taking a final restroom break, and actually warming up with a run and swim, Miles was ready to go. He felt good.

Shortly after 7:30 and the National Anthem, the contestants lined up in the pool area and took off every few seconds.  Miles was not as far up as he would have liked, and by the time he hit the water, the pool looked like slightly organized chaos to an untrained eye.  About halfway through his swim, Miles had to stop and stand as he came head to head with a swimmer who had missed going under a rope on a turn and was heading the wrong way in the lane.  The officials corrected the wrong way swimmer, and Miles finished out the short swim without other problems.  His shoulder seemed to be fine.  He had an OK transition and headed out for the 16+ mile bike ride.

As we waited, I fretted that the bike course would be well marked and the race wheels he borrowed the day before would not have any issues. Forty-two minutes later all the fears of missed turns and flat tires were relieved.  He came rolling back in.

I didn’t have a good grasp on who had been in front after the swim, so I couldn’t tell if he’d made up any ground, but time-wise it seemed like a pretty fast ride. Thirty seconds later, he’d transitioned from the bike and was on the run, disappearing off into the Furman campus.

We waited again, eventually finding a bench beside the run path near the finish line.

I was keeping time on my phone.  I just wanted him to beat twenty minutes on the 5K (3.1 miles) run, which I figured would be a pretty solid outing.

A few of the leaders finished.  Then, as the stop watch for the run time approached 19 minutes, we saw a runner with a  familiar gait round the curve. Miles looked strong and pushed through the uphill finish for a 19:19 run.

His total time was 1:07:02. This was 5th overall and  good enough for 3rd in the Open Male division. More importantly, this was the elusive solid all-around effort he’d been searching for – a good swim, a great bike and a pretty good run. Lunch at the Cherrydale Point Chick-fil-a  tasted pretty good. 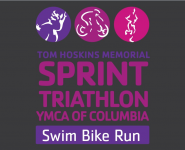 Two weeks later found us at the Tom Hoskins Memorial Triathlon in Irmo, SC.  This event takes place in and around the Columbia Northwest YMCA.  You may recall from the Prologue, this is the site of Miles’s first tri in 2013.

In 2014, his second Hoskins, Miles finished 3rd overall.  For 2015, he now had higher asperations. With two more weeks of solid training after Swamp Rabbit, his confidence was high.

We arrived at the Y at 6:00 a.m., the usual hour and thirty minutes before start.  Like Furman, Hoskins  was a pool swim. This time it was 350 yards, though. At 7:30 a.m., the athletes began the single file swim start.  Miles was closer to the front this time and even passed a few people.  There were no issus with wrong-way swimmers.  He was out of the water and into transition in just over five minutes.  Another forty seconds to complete transition one and he was off on the bike for 13 miles, chasing the few contestants who were out of the water before him.

Once again, we waited. This time, I didn’t have to wonder where he stood in relation to the others, because at just over 35 minutes into the ride, the first cyclist to come rolling in was Miles. Twenty-eight seconds later, he was through the second transition and off on the run. Eventually, a few other cyclists came in, transitioned, and took off running.  I didn’t see anyone I thought could make up a few minutes deficit, though.

Another agonizing wait. I was surprised when just past the 16:00 mark, the first runner appeared in the distance. To my relief, it was Miles.  No one was coming up behind, and he cruised to his first victory, finishing the run in 17:05.

It sounds impressive, but according to his GPS watch, the run course measured short, around 2.8 miles.  This was the only thing Miles was disappointed with in the race.  He felt really strong all day and was on pace to achieve his goal of breaking 19 minutes on a true 5K. Not only was he the overall champion, he had the fastest times in all three legs for his 58:57 total time.  Once again, a solid all-round effort.

At this point, I wanted to call it a season and end the summer with the Disney movie-esque victory. After all, who would blame Miles?  He had a great story, from flat on the pavement in May to posing on the podium in July.  There was no need to go on to the final planned event in Charleston.

To be continued…Click here for part five.

3 thoughts on “Tragedy and Triumph- Part Four: Back in the Saddle”