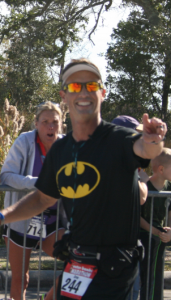 While I fancy myself more Batman than Superman (my Flash days are long behind me), I do have my own Kryptonite:  heat and humidity.  So, back in late May, when I decided to train for another crack at a sub-twenty minute 5K, the weather in the Midlands of South Carolina looked to be the fly in the plan’s ointment.  More like a horsefly. I targeted an August 6th race, as this was two weeks before my next round of marathon training would begin.

Fortunately, I had two new weapons against the heat this summer, though: one, a son as my coach who kept telling me I could beat the heat, and two, unemployment.

Huh?  Unemployment? Yep. Not sitting around in a comfy air conditioned office was an advantage.  Even the part time job I had involved working some in a shop where it hit 99 degrees in the garage shade during our record July heat. Talk about heat acclimatization.

So, I worked in the heat, and I worked out in the heat. We even kept our thermostat in the house super high.  This wasn’t necessarily for me to battle the heat, but rather to battle South Carolina Electric and Gas and the impending doom of the summer’s power bills. (Editor’s note: Just received the July bill and we lost the battle, once again.)

One common measurement of fitness in running is the all out mile.  Back on March 31st, just a few weeks into training with my new coach, I ran a 6:26 in our first all out mile test. Seven weeks later, a few days before my 20:03 5K PR, I ran my fastest mile ever – a 5:56.  That morning in May was cool, crisp 57 degrees, though – great running weather.

Last week, as the Dog Days of August set in, the weather was a different story.  At 6:15 a.m., 30 minutes before sunrise, it was already 75 degrees and high humidity. Kryptonite.  Miserable for running hard. However, I more than pleasantly surprised myself with a 5:52 for my third mile test of the year.  Maybe I could handle the heat after all. Maybe, just maybe, I should start believing. I was cautiously optimistic four days before my race.

Shortly after mentally committing to the August 6th race, I learned the band Boston would be in concert in Atlanta that same day.  That has to be some kind of sign, I thought.  After all, my running plan this year is all about qualifying for the Boston Marathon.

What better day than to set a PR in a 5K in the morning and end the day with one of my favorite bands? As an added bonus, one of my other favorites, Dennis DeYoung would be the opening act, performing the music of Styx.  (More to come on the concert in my next post.)

So, in anticipation of the great day, I created a playlist containing mostly Styx and Boston songs for my run.  I actually created two Styx/Boston playlists. I’d decide which to use at race time.

Race day presented a problem though.  The start of the race was scheduled for 8:15 a.m., pretty late for a summer time start.  As bad luck would have it, the opening ceremonies took a little longer than scheduled, and it was closer to 8:30 before the race started. It was already 79 degrees.

My race strategy for this 5K was to be much smarter on the first mile than I’d been back in May.  I accomplished this, and through mile two I was right on track.

Well, there must have been loose spikes holding the track, because just after the two mile mark, my wheels went completely wobbly, and I crashed and burned.  I struggled home with a 21:30, a disappointing far cry from my goal.

I was bummed.  My Kryptonite had foiled me again.  Oh well. I shrugged it off and headed to Atlanta.

On Sunday evening, upon returning home, I asked my coach about the upcoming week’s workouts. It was almost time to start marathon training, and I was curious for his thoughts on that.  I figured another 5K would have to wait until 2017.

“I know you can break twenty,” Coach told me.  “I still don’t understand yesterday. We should do a time trial at the track this week.”

“That means an early morning,” I said.  “It will be too hot in the evenings.”

“I guess you better get up early, then,” he said.

It means a really, really early morning, I thought to myself.  I was entering week two of a new job, and needed to be way across town by 8:00 a.m.  “I’ll think about it,” I replied and tried to work out in my head how early I’d need to wake.

By Monday evening, I made up my mind.  I’d give it another go Thursday morning.  I couldn’t recall ever doing two hard 5K’s less than a week apart.  I did recall doing a hard 10K a week after a marathon once, and all that got me was a stress fracture in my left foot. I put that thought out of my mind.

So, last Thursday morning at 5:30 a.m., I found myself all alone in the dark and in a light fog (literally and figuratively, thanks to a short night of sleep) at the Lexington High School track. I’d told my coach I’d warm up and start the trial about 5:50.  With the temperature at 75 degrees and the humidity at 100%, breaking a sweat didn’t take long . At 5:50 another set of headlights pulled into the parking lot beside my car. Coach had arrived.

Being at the LHS track for a “do-over” reminded me of the first Fowler running do-over.  It was also a Thursday in the first week of August, but the year was 2010.  My son was a rising seventh grader, trying to make the Lexington High Cross Country team.  At the first practice on a Monday night, in the two mile time trial around the school, he’d been 10 seconds slower than the “cut” line.

The cross country coach told the ones who’d come up short to come back on Thursday night and try again.  So, on a 100 degree August evening, my son tried again, having never run two hard races in one week.

This time the run was on the track.  I’d like to say, in a Disney-esque ending, he beat his previous time.  Unfortunately, he was much worse. Fortunately, the cross country coach looked at his running log from the summer and first time trial and decided to keep him on the team.  I hoped for a better do-over.

Readers of this blog should know by now, I spend way to much time thinking about my music for running.  As I thought about the run during the week, I decided I indeed needed to have a playlist for the trial.  I didn’t put a ton of thought into it, though, as I’d already done that.  I simply selected the other Styx/Boston playlist I’d created for the previous Saturday. This time I’d end with “Rockin’ the Paradise”, instead of starting with it.

It was almost 6:00am.  I changed my GPS watch for a 3.1 mile split, and I set off for 12 and 1/2 laps around the track. Funny thing happens when your brain is being deprived of oxygen: counting becomes difficult. Somewhere during the third mile, I lost track of my lap count.  What I thought was lap 12 was actually lap 10. Uh-oh. No wonder my last song had not come on yet. I was doing great until that point, but I was starting to slow and the pain was setting in. The light fog was turning into a heavy wet blanket of Kryptonite.

Soon, I reconciled the distance number on my watch and the distance left, and tried to hold one for two more laps. I passed Coach with a half lap to go and he yelled something about sprinting.  I wouldn’t call it a sprint, but I tried.  A few moments later, my watch vibrated, indicating the end of my trial, and flashed my time – 19:42.

I’d done it.  Finally, I believed.

My coach joined me as a I walked around the track to catch my breath.  It was still dark, and the glow from the parking lot lights spilled over to the track.  Looking back, I think maybe I chose the wrong finale song for my playlist. It probably should have been:

Working hard to get my fill
Everybody wants a thrill
Payin’ anything to roll the dice
Just one more time
Some will win, some will lose
Some were born to sing the blues
Oh, the movie never ends
It goes on and on, and on, and on

Don’t stop believin’
Hold on to the feelin’
Streetlight people

You can try, but you won’t find the results of this event anywhere online. You’ll just have to trust me. However, I will keep a mental asterisk beside the result indicating I did it on a track with no hills until I can bust 20:00 in an “official” event .

However, there’s one thing I’ve decided will never have an asterisk beside it, and that’s my feeling this was one very special summer.