April 11, 2009 was probably the most historic day in Fowler Family running history.  Not only was the Newberry County Memorial Hospital 5K that day the first 5K for my wife, my son, and me, all three of us actually won age group division awards.

I had only been running for five months at this point, and this was my second race, having completed a 10K in February.  l didn’t have much of a clue about what a good running time in a 5K was, so I thought my 23:27 first place age group time was pretty good. That was until I saw that the overall winner of the race was a guy named Eric Ashton who was also my age (41) but ran the race in 15 minutes and some change. Bubble burst.  This guy was finished about the time I was passing the two mile mark.

Over the next few years, I keep running and completed many races but rarely won another age group award.  I mainly focused on longer races and only improved my 5K time to 21:26, coming in the 2013 Jailbreak 5K. I figured I had started this sport too late to improve much in a 5K and any speed I had was left on some baseball field in Greenville County thirty years ago.

A couple of years after his first 5K win, my son decided he wanted to run on the high school cross country team.  Around our area, kids can start on the team in 7th grade and that year, he was one of two 7th graders on the team.

In high school cross country, runners compete in 5K races.  It was through cross country I learned there is a time to beat that separates the good runners from the rest of the pack, kinda like a golfer’s quest to break 80. In 5K’s, that time is the twenty minute (20:00) mark.

Young runners strive to beat 20:00 and for some it becomes a mental hurdle, too. Occasionally, a 7th or 8th grader will break into the teens, but most likely it is at least 9th grade before the boys start threatening 20:00.  My son followed this pattern, but by end of his 9th grade season, 20:15 was the best he had managed.  He was discouraged and had reached the low point of his short running career. I didn’t know it then, but he was seriously contemplating quitting the sport in frustration.

The Internet Says So

You might not know this, but  there’s a whole bunch of misinformation on the Internet. So, when I read that experts say I must be in shape to run a 5K in 21:06 to ultimately run the three hour twenty-five minute marathon I need to qualify for the Boston marathon, I tried to ignore it.  My 21:26 would have to do.  What do researchers with P.H.d’s in exercise science with data from thousands of race results know anyway?  Besides, I wanted to focus on longer races, anyway.

Well, the more race data I accumulated on myself, it became clear I was not progressing enough for my Boston goal in those longer races, either.  And honestly, I was getting tired of a lot of effort with poor results.  Maybe there was something to those race time predictions. I had reached a low point, too.

Maybe it was time to call it quits.  I had one last idea, though.  I wrote about it in a post back in March. You may recall, I fired myself as coach and hired a new one.  Really, the only one I could afford, and he was right under my roof.  Thankfully, my son put those quitting thoughts out of his mind in 2013 and found reason to train his hardest the summer before 10th grade, making huge performance gains. With his renewed sense of purpose, he shattered the 20:00 mark, completely skipping the 19’s and vaulting into the 18’s and 17’s for his 2013 cross country season. Now he’s a preparing for a college triathlon career and trains under the tutelage of an amazing endurance coach.

On Monday, March 7th, two days after a disappointing Columbia Half Marathon, I started training for a 5K.  Seems kinda silly to say for someone who’s run nine marathons, but we decided to go back to square one.  If the experts say I need to run a 5K in 21:06, fine. I’d work to do that before I tried another marathon.  We set my goal to  break 21:00 for the Jailbreak 5K on May 28th. Jailbreak was the site of my 5K PR in 2013, but for the last two years, I was stuck on 21:39.

The first two days of training went OK, but when I had to wake up at 4:20 a.m. to get to the gym for our first weekly 5 a.m. functional strength workout, I began to wonder what I had signed up for. My pitiful performance at the workout didn’t help either.  A week later, we added food tracking to our plan, with a goal to lose 10 pounds before the race, roughly a pound per week.

Then on April 1st, I did something I didn’t think I could do – I gave up Diet Dr. Pepper and all other soft drinks. I couldn’t completely give up artificial sweeteners, though, and allowed myself to have Splenda with my unsweetened tea, and I started using Stur sweetener in water.

Each week, on Sunday night, I received an email from my coach with the upcoming week’s workouts. Over the course of the twelve weeks, I only had three days off and performed almost 100 workouts, as some days had two.  Usually, three days of the week were hard run work outs. The other days were either recovery bike rides or easy runs or both.  One day a week was the functional strength workout. By race week, I could actually do the pull ups in the strength workout and had gone from holding two 10 pound dumbbells on my one legged squats to holding 30 pounders.

On a semi-whim, I ran the Governor’s Cup Half Marathon two weeks before Jailbreak after a full week of hard  training, coming home with a three minute personal best in a half marathon (1:39:09), a full seven minutes faster than my March half marathon.  I began to think I was on to something.

On May 28th, I stood at the start line 11 pounds lighter. I lined up a few rows behind some Kenyans who had ventured into town for the cash prize money.  I also noticed a familiar figure – a now 48 year-old Eric Ashton lined up with the Kenyans.

The starter sent us off, and I pressed play on my earbuds.  Night Ranger’s “Touch of Madness” kicked in.  I was off, and in the fastest and dumbest mile of my race career, I ran the first mile in 6:03. Madness, indeed.

Oh, this is going to hurt bad, I thought.  After all, my early years of running had taught me starting out too fast kills.  The question was could I hold on enough to beat a 6:26/mile pace? The second mile had more uphill in it, and I slowed to 6:35 for it. My overall pace was now 6:19/mile.  The wall was being built.  I was hurting, starting to pay dearly for my first mile mistake.

At this point, trying to figure out what kind of pace to maintain was too complicated to do in my head in the middle of a race, especially when my brain was occupied on other functions, like trying to breathe.  I knew that hitting a 6:26 pace for the third mile would be good enough, but each time I glanced at my watch, it showed my pace between 6:40 and 6:50.  I tried to speed up, but I felt like I was running in quicksand.

Finally, my watch beeped and showed 6:45 for mile 3.  Not good, I knew.  The finish line was now in view.  Thanks to the prescription sunglasses I now wear, I could see the race clock in the distance read 19:40.  I had at least 150 yards to go, and I put every I had into it.

A short time later, I stood around watching the awards ceremony.  As expected, one of the Kenyans won in an unbelievable 14:06.  Then, as I hoped, 48 year-old Eric Ashton won the Male Masters (over 40) category at 16:09, making him ineligible for the mere mortal age group awards.  Eventually, the announcer called out the winner for the 45-49 year-old age group with his time of 20:03 –  Greg Fowler.

Oh, well. Lesson relearned. My coach and I already have another 5K targeted for later in the summer to break that 20:00 magic barrier.  The looming summer heat will add to the difficulty.  After that race, I’ll enter my next cycle of marathon training, this time with the proof that I’m now fast enough to get to Beantown. 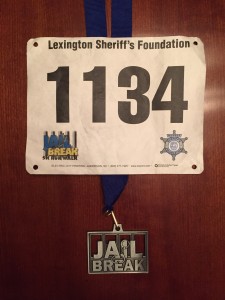