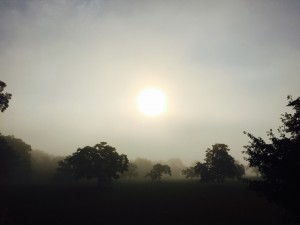 I stood at the end of my driveway and assessed the situation. Cicadas were already creating their summertime background noise. The sun was just about to peek over the tree line. Some  patchy fog looked like it would help mute the sun’s rays for a bit. The trade off was the almost 100% humidity. It was 7:30am, and I was too late to beat the heat.  Oh, well. Time to run.

I decided to take a route I hadn’t been in a while.  As I came upon a bend in the road, I heard the beast before I saw it. He or she had seen me first and called out the warning barks. Fortunately, the music in my ear buds  wasn’t loud enough to drown out the greeting.

I slowed to a walk as I do when confronted by dogs, trying not to aggravate the creatures any more than necessary.  I heard someone from the dog’s house yell something along the lines of ‘”Get back here!” to him. Then the out of sight person yelled “He’s friendly; he’s just saying hello“.  I wanted to yell back “Ya know, lady, I don’t speak dog, but even I can tell he’s not exactly rolling out the welcome wagon!”

I finally spotted the dog, trotting out from behind a large Leland cypress.  He looked to be a fairly young pit bull or maybe pit bull and boxer mix.  He gave a couple more warning barks, clearly focused on me.  I heard the women again command him to come back. He’s not listening, lady! I said to myself  He was still coming.

At this point I stopped and waited, pondering my options. Squirt in the face with the water bottle? Kick? Run? Why haven’t you ever bought mace? was a thought, too.

With about ten yards between us, the dog increased his speed.  With the gap just two yards, I made my decision. Doing the best imitation I could of my friend, and sometimes training partner, Craig, I yelled a loud “NO!” accompanied with a vicious finger point. On our bike rides, Craig usually leads and is the first to encounter such rushing dogs.  His yelling trick almost always works, causing the dog to stop long enough for us to whisk away on our bikes. Or, if I’m too far back, it lets Craig get on by while the dog waits for me.

To my surprise, it worked this time, too, even as a runner.  The mutt turned and ran off, literally whining as he headed in the opposite direction. What a whimp, I thought. Whew! I couldn’t believe it.  Normally, I would have gone a little farther to my turn around point and reversed the route to go home. That day, though, I avoided passing the dog again and took a different route to the house.

This week I learned the official dog days of summer are roughly July 3rd until August 11th, the length of time twenty days before and twenty days after the conjunction of Sirius the dog star and the sun. (Whatever that means.) In many parts of the world, this is the hottest time of the summer. Not so in the midlands of South Carolina.

I’d offer up the official dog days of summer don’t begin here until August 1st and  sometimes don’t end  until Halloween. August is the time of year in South Carolina when it can be a humid 90 degrees at midnight, and you thank God for an air conditioner as it churns non-stop day and night.  Then you cuss South Carolina Electric and Gas when the electric bill comes.  I’d still take it over a Massachusetts winter with 100 inches of snow, though.

Unfortunately, I have more than real dogs and heat hounding me this August.  There’s a daughter entering middle school and the fear associated with that.  Mine not hers.  I have a a son embarking (see that?) on his last high school year. Where did time go? And I have an uncertain job future growling at me like a junkyard dog on a fully taut rope.  With a fray… 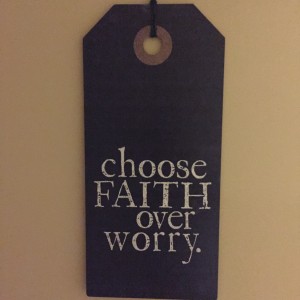 I wish I could just  yell “Stop!” and make these worries just go away, but we all know life doesn’t work that way. There’s no magic command to make anxiety disappear. I can try to obey the sign hanging in my house that says “choose FAITH over worry”.  That actually does seem to work, but I like to feel like I’m doing something, too. So, I’ll set the Saturday alarm for zero-dark-thirty, roll out of bed and hit the ground running. This time before the cicadas and, hopefully,the dogs are awake.

PS.  I needed a race to get my run motivation back into gear.  So, last week I signed up for the Lexington Half Marathon.  The race is November 14th.  You can check it out here: https://www.lexingtonhalf.com.  If you’re interested in running it and would like to discuss training, feel free to send me an email: GregoryEFowler@gmail.com.