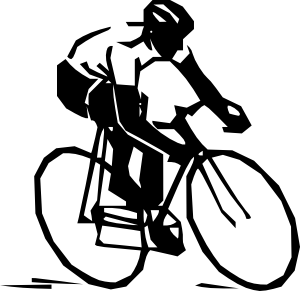 I looked to my left into the cab of the pickup truck.  I really didn’t expect to see the man sitting in the driver’s seat working on his laptop.  I guess that brief surprise caused me to lose my focus.  That’s when it hit me, that feeling of “Ugh, not again!”

A couple of hours earlier, my friend Craig and I had headed out on our semi-usual Friday morning bike ride.  Craig is in training for a half Ironman triathlon, and we’d been slowly increasing the length of our rides. During the summer months, we usually started from the nearby high school. School was now in session, though, and we needed to leave from the parking lot of a nearby Bi-Lo grocery store.  We parked on the outskirts of the parking lot, just to stay out of the way.

This morning’s ride was supposed to go 50 miles, but I wasn’t sure if I’d be able to make it the entire way.  Oh, I could do the mileage just fine, I just had a late morning appointment and wasn’t sure if I’d have time to get in the whole ride.

Since Craig and I are not the youngest guys anymore, our pace on these rides is usually 16-17 miles per hour.  We pulled out of the parking lot of the Bi-Lo about 7:40am.  I figured if the ride went well, we’d be done around 10:45am, and I’d have just enough time to dash home, shower and make it to my appointment.

The only problem with the early time is the school and rush hour traffic.  We’re not in the heavy stuff long, but as we turned off the busy road onto a less traveled side road, I glanced back and saw we managed to slow down a line of cars about eight long.  I imagine they weren’t too happy with us.

Today’s ride was actually a new route for us.  In an effort to combat boredom, Craig received directions for the new route from another triathlete friend.  He’d printed out the directions but left them at home.  Not a big problem, since we had our smart phones.  I just brought up the document and we reviewed the route.  We were familiar with much of the roads, but there were a few new ones near the halfway point.  We’d have to stop a few times to review the document.

One of the potential problems with a new route is whether or not you’ll come across a new dog.  Dogs are sometimes a problem, especially on the back country roads.  Apparently, the rural folks don’t believe in following the leash laws or installing fences, except for maybe goats.  Today, we were fortunate.  We did come across one ferocious German Shepard, but he was actually fenced in.

As we approached the 35 mile mark, I looked at my watch and realized I needed to take a detour.  Having a new route and stopping a couple of times to check the route sheet on my phone had slowed us a bit.  I wouldn’t be able to make the entire 50.  I told Craig I had to peel off and turned left onto Highway 1, which would take me most of the way back to my car.

About twenty minutes later, I turned right into the parking lot of the Bi-Lo and saw the pickup truck, parked one space back and to the left of my car. Since I had parked on the outer edge of the lot, I found it odd and a bit irritating that it was parked there. It was in my way. Slowing down as I approached my car, I flicked my right heel to the right to unclip my bike shoe cleat.

That’s the point I made my mistake. Distracted by the man on the laptop, I forgot to unclip my left shoe. As I felt my balance shift to the left that thought of “Ugh, not again” entered my head and for a moment I could only brace for the inevitable. With my left shoe still attached to the pedal, I fell to the ground with a crash.

My left knee took the brunt of the blow but my pride was probably hurt most. As I struggled to release my shoe from the pedal with the bike on top of me, the man in the truck hopped out and rushed around to me. “Are you OK?”

“Yep. Just a bit aggravated. Thanks.”

Back on my feet, I quickly loaded up the bike and looked for something with which to wipe my now very bloody knee, I couldn’t believe that had happened again. How embarrassing. Since starting to ride last year, I’d fallen only one other time, in almost the same manner, forgetting to unclip after a long ride and falling helplessly in a parking lot in front of Craig and my son.

Hopefully, this lesson has been learned for good now. Gravity still works.

One thought on “Gravity Revisted”