This is Part Two of my experience in the Run Hard Columbia Marathon.  To read Part 1, click here.

At 7:20am, March 7, I wandered over to the starting line of the Run Hard Columbia marathon. In 2013, I said I’d never run this marathon again.  Yet, here I was.

The air was 34 degrees, but the skies were clear.  I was hoping for a quick warm up to 50 once the sun rose a bit higher.

I had managed to make it through miserable February weather running 6 days a week and not violate Don’t Rule #1 (Use a  treadmill).  My knee was sore, but I had not violated Don’t Rule #2 (take NSAIDs).

But… I was tired.  No, tired is not entirely accurate.  Exhausted is probably more like it. After 6 months of tough training for two marathons, even I was sick of running.  I needed a break. Three and a half hours to go until that break.  I hoped.

For Columbia, I changed my pre-race routine a bit.  First, I’d read about something called a shake out run.  Supposedly, the elites do this: a short easy run first thing out of bed on race day before going about their preparations.  So, at 5am Saturday morning, I hit the road around the neighborhood for a slow one miler in the dark, 26 degrees. Brr.  Good news was my knee was decent.  Not perfect, but there was a glimmer of hope there.  Second, I did not warm up as much before the race.  Usually, I like to walk a mile to and then do a mile of easy running with a few short bursts of speed (for me) in there, so I’m breaking a sweat.  This day, I did some walking and very easy running and a few dynamic stretches. I also went up and down the state house steps a few time as a hill warmup, pretending to be Rocky Balboa.

My plan was to use the first couple of miles as my main warm up.  Also, for the first half of the race, I planned to keep my heart rate down, especially on the hills.  I would then get down closer to my desired race pace for the second half.  For those of you keeping score at home, my Boston Qualifier time to beat is three hours twenty-five minutes (3:25:00)which is a seven minute forty-nine second (7:49) per mile pace.  I had no intentions of going for this today, though. I had in the back of my mind that beating my December 2014 Kiawah time of 3:37 (a pace of 8:15/mile was the time to beat, given my previous experiences in this event and the now the wildcard knee.

The starter sent us on our way at 7:30am, and I clicked play on my recycled Kiawah playlist.  I was mildly disappointed in myself for taking the lazy route on the playlist, but I guess that happens.

The first test of the knee came on the steep downhill of Blossom Street during the first mile.  Not bad.  I played my heart rate just as planned and my first lap pace was 8:34.  OK, I can live with that.  During the early part of mile two, I realized I had another problem, though, which is very unusual for me during runs.  My bladder told me that the pit stop I took twenty minutes before start was not good enough to get me through the race. As I slowed my pace to keep the heart rate down trudging up Saluda Avenue, I had a decision to make.  Stop now or later?  As we approached the aid station near mile marker two, I checked the port-a-john, and seeing it was clear, decided now was best.  While this stop put my mile two split at 9:18, it also allowed my heart rate a great recovery after the big hill.  I then eased back into the crowd and average about 8:00/mile for the next 6 miles.

For me, the stretch from just past the mile 8 mark to around the mile 12 mark is the  part where this marathon kills.  The first part of this stretch is Trenholm Road.  It’s a long gradual 2 mile uphill that just grates on you.  I didn’t do the greatest job of keeping the heart rate down, but my pace was decent (8:13 & 8:21).  The last part of this stretch contains two short steep Gervais Street hills.   I survived these OK and settled back into a groove around the 8:00/mile mark for the remainder of the first half, finishing it just over the 1:47:00 mark – pace of 8:11/mile.

In running, there’s a race strategy that almost always leads to having a good outing.  It is called a negative split.  This means running the second half of a race FASTER than the first half.  I have never done this in a marathon.  Not even close.  I’ve done it in a half marathon that happened to be my personal best in that distance.  Maybe today would be the day to do it in a marathon.

Given my pace was 8:11/mile at this point, I knew I was already ahead of my best effort ever from Kiawah last December.  That pace was 8:15 that day, but that was after holding 7:49 for 19 miles and then crashing and burning.  At this point, though, I couldn’t get my heart rate down to where I wanted without slowing down too much.  I felt like I was in a good groove, so I just went with it.  For miles 14-20, I averaged 7:49/mile, lowering my overall pace to 8:04.

With 6.2 miles to go, I found myself in new mental and physical territory.  Usually by mile 20, I feel my wheels coming off and my body shutting down. I was not experiencing any of that.  Mile 21 was 7:57.  Wow. Still good. What was going on?  Maybe those 50 mile weeks were now paying off.

However, I was now staring at Trenholm Road again.  Two miles of uphill agony about to start.  8:02 and 8:23.  Hammered.  I’ll take it, I thought to myself, but did it that take too much out of me?  Mile 24 brought a bit of a reprieve from the up hill battles, and I recovered nicely to an 8:06 24th mile.  However, I was redlining.

With 2.2 miles to go, my overall pace was still 8:04.  At this point, it was tough to do math in my head, but I kinda figured I could totally collapse the last two miles and still come out with a personal best.   I didn’t want to back into it.  Gotta finish, remember? I had one last nasty hill to go, though – the second of the Gervais Street torture zones.

It felt like a walk up that final hill, but I promise, I was pushing with all I had.  I managed 8:29 for this mile, but Trenholm and Gervais had taken their tolls.  With just over a mile to go, I was really struggling.  The wall had finally gone up.

Fortunately, this marathon has one of the better finishes – flat and straight down Columbia’s Main Street with the South Carolina capital dome in the distance.  I took the last turn of the day, left onto Main Street.  I could see the dome.  Less than six city blocks to go.  Knowing the finish was there, I focused on the dome.  I felt terrible.  With less than a half mile to go, my right calf sent out a cramp warning signal.  Oh no, not now, I told it.  Fortunately, it obeyed.  I felt like I was in slow motion with lead shoes.  My body ached and I was light headed. I had to be weaving. I remember glancing at my watch for pace.  I was shocked to the current mile split pace still below 9:00. The watch beeped for the mile 26 split: 8:41.  Hold on, we’re almost there. Two blocks to go.

The red and white inflatable finish line marker loomed large. I entered the finishing lane.  I could see my son just past the finish line.  He’d been working as a volunteer with the race and had come down to hand out finisher’s medals.  I crossed the line and he placed my medal around my neck and gave me a big hug.

My official time was 3:33:55, an 8:09/mile pace. I had shaved three minutes off my previous best from 3 months ago in Kiawah.  Perhaps more surprising, I knocked off over 19 minutes from my last Columbia marathon in 2013.

AND…Guess what?I had finally run the elusive negative split in a marathon.  My time on the second half was about a minute faster than the first.  If I wasn’t committed to the whole Boston Marathon goal, I would consider walking away from marathons right now.  I ran an almost perfect race for my abilities on the toughest course I ever run.

Alas, I won’t retire just yet.  I feel like with this race, I just took a giant leap forward.  I understand better what it takes to keep improving.  I just have to decide if I have the time and energy for it. 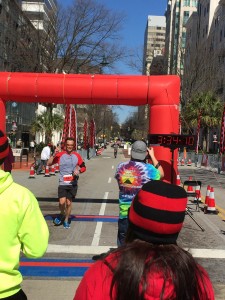 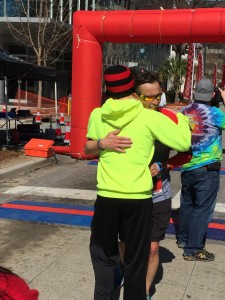