Once upon a time, I played a lot of golf. I took golf every bit as serious as I do running.  Perhaps, more so.  It was all or nothing.  In it to win it.

My golf buddy Bob and I had a motto.  It was “You gotta finish”.  If you’ve never played golf, you may not understand, but anyone who has stood on the 18th tee (the final hole for you non-golfers) with a chance to reach a new plateau by breaking 100, 90, 80 and especially 70, will  understand.  On the 18th tee, with glory in reach, fairways become narrower, sand traps grow larger, and water hazards look like the Great Lakes.  In other words, the pressure is on and to attain your triumphant score, “You gotta finish.”

Of the many times Bob and I came to the final hole with breakthrough rounds at stake, we did NOT finish more often than we succeeded.  Thankfully, our paychecks didn’t depend on our golf skills. Recently, though, Bob finished his MBA degree.  Originally a two year plan, life and loss of interest made it more like seven.  He did it, though.  He finished.  Way to go, Bob! 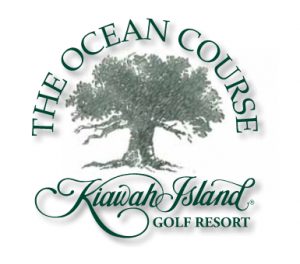 In those many years of playing golf, my absolute favorite place to play was The Ocean Course on Kiawah Island, South Carolina.  The place is a magnificent gem right along the Atlantic Ocean. The course, along with the rest of Kiawah Island is covered with my favorite tree, quercus virginiana.  That’s a southern live oak.   The logos for the Kiawah golf courses even reflect the abundance of these grand oaks on the island.

On Saturday, December 13th, I found myself back under the live oaks of Kiawah Island.  This time wasn’t for golf, though. I was standing at the starting line of the 2014 Kiawah Marathon.  As I listened to three local middle school saxophone players perform the national anthem, I looked up through the branches and leaves of a nearby tall live oak and saw a clear blue sky.   The temperature was a chilly 37 degrees but forecasted to warm up quickly.  To me, this was “chamber of commerce” running weather.  I could not have imagined  it up any better.

Keep on chasin’ a dream

My goal for the day was to beat three hours and twenty-five minutes (3:25:00).   That is a pace of seven minutes forty-nine (7:49) seconds per mile for 26.2 miles. A time faster than 3:25:00 qualifies me for the Boston Marathon in my age group of 45 to 49. I knew the goal might be slightly unrealistic and had fretted for a couple of weeks about how hard to push myself.  How much pain did I really want to endure?

I was confident in my ability to maintain this pace for 20 miles, but I was concerned, as usual, about one of my nemeses – the last 6.2 miles, where I hit the dreaded “wall”.   If you’ve read earlier posts, you may know my training had not gone well early and the flu beat me up for a week in the middle of my training.  However, the last month of workouts was awesome, and I felt great.

I’d calculated several different pacing scenarios (nerd) and each one showed pretty much the same result. I could be aggressive with a high risk of hitting the wall and even if I hit the wall most likely set a personal record (PR). I could also go conservative (and, therefore, possibly no wall) and come out very close to the same PR.  The only option to have a shot at my goal of 3:25:00, though, was to go out the more aggressive pace and see what happened, risking the crash and burn.  Since I’m not a pro and don’t  run these too often, I decided to go for it.  Like Obi-Wan to Luke, Bob’s voice played in my mind, “You gotta finish, though.”  I know O-Bob-Wan, I know.

The middle schoolers shook off a shaky start to their performance, nailing the “land of the free” high note at the end.  It was time.  A guy next to me kissed his significant other on the cheek and wished her good luck.  I started to ask him where was mine but held my tongue instead.  The announcer then counted down and with a final “Go”, we were off.  I pressed the play button on my headphones and “The Launch” from Boston’s Third Stage album started to play.

Will our hero finish the race?

Will he actually qualify for the Boston Marathon?

Will he just walk away from running like Forrest Gump?  Will he return to golf if he does?

All these answers and more coming soon.

2 thoughts on “You Gotta Finish – Part One”