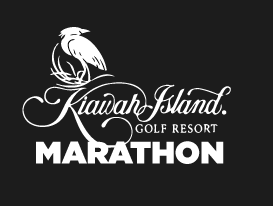 This is part of two of  a story about my experience at the 2014 Kiawah Marathon.  For Part One, click here.

December five years ago, I stood very close to the same starting spot for my first ever marathon.  The organizers changed the course a bit since then and that was one of the reasons I was back. Just getting to the start that day in 2009 was a challenge.  We didn’t stay on the island, so I was up long before dawn to drive 45 minutes in from North Charleston and catch a shuttle from off-island parking area.  We didn’t have any major problems that day, but the whole process was stressful.

At that time, I’d been a runner for almost one year.  I wasn’t terribly confident yet in my ability to run a marathon, so I did a training run of 26 miles a month before.  Turns out that wasn’t smart or even necessary, but I was a self taught newbie. My teacher did not really know what he was doing.

My goal back then was to beat four hours.  The weather in 2009 was the opposite of chamber of commerce. The temperature was in the low 40’s for much of the race, and it was misty, making for miserable conditions.  On top of being cold, I developed a blister by mile 5  trying to use mole skin to prevent a blister in a different spot. I managed to limp to the finish that day in just under four hours and headed straight to the medical tent to look at that blister.

You mean I have to do that again?

One lesson I learned that day was the loneliness of  two loop marathons.  Until 2012, Kiawah Marathon was a two loop course.  The first lap in two loop courses is great.  The run group is larger because you are running with all the half marathoners.  However, they turn to finish at the 13 mile mark and suddenly, you, the full marathoner, are pretty much alone.

I said then if I ever went back to Kiawah, I’d stay on the island, but I really didn’t think I’d be back because I didn’t like the boredom of their second loop.  That interest in going back became much stronger when the race organizers changed the course in 2012, eliminating the second loop.  After my 2013 Outer Banks Marathon experience, I was looking to go back to a flat course, and my friend Alan convinced me to sign up for Kiawah during early bird registration.

So, here I was, back at Kiawah.  This year’s trip was much better than the first time.  We stayed on island, just a few minutes walk to the start line/finish line/epicenter of the race activities.  The drive down the day before was uneventful, e.g. no car transmission failures in route to the race.  I was also asleep before 10pm on Friday night.  Life was good.

As “The Launch” played in my earbuds and the runners surged down the first mile, I tried to settle in.  I decided almost immediately I really liked the  start location change.  It seemed to make for a really smooth start.  In 2009, I remember being too jam packed, making it tough to get going.  Not so this time.

One interesting thing about the Kiawah event is the turnarounds, points where you reverse course and run facing the people who are behind you.  The first one of these is fun.  It is about the 7 mile mark, near the Ocean Course.  There, I had the chance to look for my running buddies/condo mates as I changed direction.  I picked them out of the crowd and gave them a thumb up.  I was slightly ahead of goal pace and felt like I was on cruise control. I could see I had significant lead on the man carrying the 3:25:00 pace group sign.  Hmmm.  That might not be a good idea. “Slow down, Greg,”  a voice echoed in my head.  O-Bob-Wan, is that you?

Just past the 11 mile mark, the half marathoners stay to the left and the fulls (fools?) take a right.  As I expected, the pack I was with kept left, while I took a right and headed down a lonely stretch of road.

Along the way, we had a couple more turnarounds.  Each time I headed back past the thinning crowd, I could see the 3:25 pacer closing in. By the mile 18 turnaround, my legs were severely protesting. I could see the pacer was within 20 yards. Finally, before the 19 mile mark, the he passed me.

I would like to say I dug deep and kept up.  Alas, that was not the case.  I had a Sammy Hagar song on my playlist called “When the Hammer Falls.”  I had it slated for around mile 24, signalling me to put the hammer down.  Unfortunately, I was the one receiving the blow. At this point, I was getting seriously worried about surviving this crash and being able to meet that PR.

I was really hurting now and feeling awful.  The song starting just past mile 21 on my playlist was ELO’s “Turn to Stone”.  I didn’t know it would apply to my legs. By the time Taylor Swift told me to “Shake it Off” a couple of miles later, it was too late.  A 400 pound gorilla had jumped on my back, and he wasn’t going anywhere.  The last 40 minutes were some of the hardest I’ve ever encountered in running.

I averaged 9:17 over the last 6 miles, with a couple of 10:00 plus miles on 24 and 26.  I finally exited the path for the final section down the finishing shoot, removing my earbuds to enjoy the crowd as much as I could in my condition.  My playlist was long over, anyway. I spotted my wife and a friend of ours at the final turn.  Mostly delirious, I smiled, waved and turned toward the finish line.  Hallelujah.

Despite my usual marathon crash and burn, I managed a personal best of 3:36:53, good for 10th place out of 70 in the male 45-49 year-old age group.  Sure, I was about 12 minutes short of my goal, but it was a personal best by more than five and a half minutes.

Since I view this as decent progress (don’t correct me if I’m wrong), I will continue on this whole Boston Marathon pursuit.  Had I not shown decent progress, I would had to have a serious talk with myself about this insanity.  I do think some training tweaks are in order for 2015.  More to come as I hash those out.

And time doesn’t wait for me, it keeps on rollin’
There’s a long road, I’ve gotta stay in time with
I’ve got to keep on chasin’ that dream, though I may never find it
I’m always just behind it.

If you’ve ever thought about doing a half or full marathon, I would highly recommend Kiawah now.  I loved the changes to the second half of the race.  If you register now, you can take advantage of super low early-bird entry fees.  Talk some friends into doing it, too, and stay on the island.