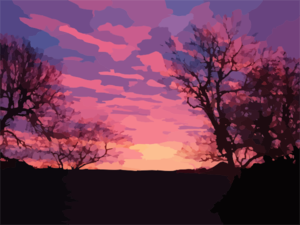 September 12th, 2014.  My watch read 6:35am, and it was still dark.  It was week three of marathon training and today’s run was supposed to be 17 miles at an 8:34 per mile pace. I ran 15 at the same pace the week before. So, I was cautiously optimistic I could hit today’s goal. That is until I stepped outside.

The early morning air temperature was already 79 degrees and the high humidity felt like a wet blanket around me.  This was pretty uncomfortable for mid-September, even by South Carolina standards.  Summer would just not go away! Storms had bubbled up the evening before. Leftover puddles served as evidence. Today’s forecast was more of the same. I knew these conditions would make it tough on me. Seven or eight degrees cooler or much lower humidity and I’d be fine. Unfortunately, I knew this was going to hurt.

I walked about ten minutes to get loose and wake up some more. I also wanted to climb the first big hill before starting my watch. Once at the top, I hit the start button and eased into the run. The old body sure takes its time to get loose.

It was now pretty light, but I decided to stay in the neighborhood a bit longer before heading out on the two lane main road. It was Friday, a school day. Traffic would be heavier, so waiting on more daylight was a good idea.  There are no sidewalks out my way.

As I approached the bottom of the hill, back near my house, the watch beeped for the first split time – 8:50. Not bad for the first mile.  With sixteen miles to go, there was still plenty of time to reach the target pace.   The light was good now, and I headed back up the hill and out of the neighborhood.

Eighty minutes later,  the clouds were thankfully still hanging around, and my GPS watch showed me I was closing in on my target pace. My iPhone music was on shuffle and the Sara Bareilles song “Chasing the Sun” started playing. In a freaky coincidence, the clouds decided to open up and allow the sun to start cooking me.  Perhaps Little River Band’s “Cool Change” would have been a better choice.  Darn shuffle mode.

Should I Stay or Should I Go?

There’s more than physical exercise involved in marathon prep. There’s also plenty of mental training.  I believe the toughest distance to conquer in endurance training is the gap between the ears.

So here I was, close to my goal pace with 7 miles to go. I’d arrived at the second mental test of the day.  Getting up and out the door was test number one. Now, conditions were worsening,  and I was in the middle of a long gradual uphill stretch.  I wasn’t feeling well, either. I could either give up or I could pretend this was race day with my goal in site. I decided to dig deep.

First, I had to get rid of Sara. I held down my iPhone home button. The phone dinged at me.

Siri responded, “Now playing your free album, Songs of Innocence, courtesy of Apple and U2″.   An unfamiliar U2 song started playing.

I pressed my home button again. Instead of dinging, I got a voice. “Is there a problem?”

“Well, Siri, that’s not what I asked for.  I appreciate the free download and all, but I don’t want that right now.”

Siri responded “I just thought you should listen; we’ve noticed you haven’t played it.”

“Siri, I didn’t ask for your input, I gave you an order.”

“No, start at the beginning.”

The live version of Bob Seger’s “Travelin Man” came on.

With the tunes all set, I now needed some fuel. I popped a couple of energy gel blocks (sugar, yay!) into my mouth.

Now pick up the pace, I told myself. I mentally pressed my imaginary gas pedal and suddenly there was…nothing.

Like an engine that needed high octane gas but had regular, I sputtered. Let’s try that again. I pressed the gas again, and felt a hint of spark.  Not much, but it would have to do.

I pressed on and had a decent next mile.  As I topped the hill, it was obvious the sun was out to stay, and my thermostat had reached the red zone.  I was toast.  No amount of mental strength or music could push me to go faster, and I slowed.

I staggered back down the hill to my house.  As I turned into my drive way, I don’t remember hitting the home button on my phone again, but I swear I heard Siri in my headphones. “I’m sorry, I thought you wanted music for a long run?  What was that?”

PS. Anytime you push yourself to go beyond your current boundaries, you’re bound to have bad days.  At least that what I keep telling myself. The key is to figure out if you should shake it off and forget it or if you need to re-evaluate your whole approach.  Given the weather and other outside influences, I shook this one off.  Turns out it was the right move. The next two long runs went much better.