Ah spring…more like Ah-choo! spring.  The older I get, the worse my allergies become.  Unfortunately, with the pollen in the air and the weeds growing faster than the grass, it is time for mowing and yard work.  I dread it.  Funny how things change.  Once upon a time, landscaping was a hobby.  I even took night classes in landscape design at the local tech college .  That’s where I developed my disdain for the Bradford Pear and why I cannot pass an oak tree without trying to identify its type by leaf shape.

Fortunately, with a teenage son, most of the yard mowing duties are pushed off on him. Getting to the mower is another story.  It is my job to dig it out from its winter nap.  Attempts to straighten other parts of the house over the winter means junk inevitably winds up in the workshop garage instead of the dump. So uncovering the mower requires moving around boxes, Jeep parts and other stuff to create an extraction path.  This exercise always reminds me of that puzzle with the 4×4 grid of squares with one blank.  Standing in front of the workshop, I wrestle open the door and start the process.

Old boxes tend to distract me, though, and I open one.  Inside, I find my prized possession from 1980 to 1986 – the RBG4 time machine.  Back then, it wasn’t a time machine. More of a secret weapon. Think Luke Skywalker’s lightsaber. It has only morphed into a time machine during the last few years.

I pull out the time machine.  To work, it must be placed on the left hand.  I slip it on.  My left index finger slides out of a hole in the back onto a worn spot. There is a circular cavity, slightly bigger than a quarter, to the right of the finger hole.  It used to be a bright red woven patch with a white script R. Now, only a few threads hang loose. 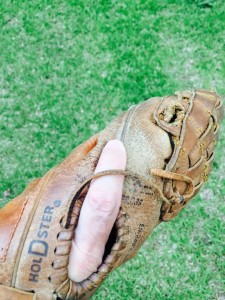 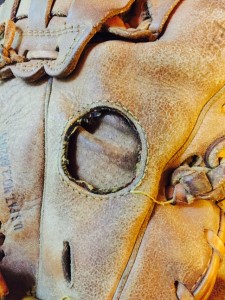 My other fingers are enclosed by the device.  The inside is  rough to the touch, like I imagine alligator skin, but it feels…right.  I turn my palm toward me and look at the other side of the time machine.  There’s a script signature stamped into the center – Cesar Cedeno.  In a larger, block style font, RBG4 is stamped a couple inches below that, on the heel. 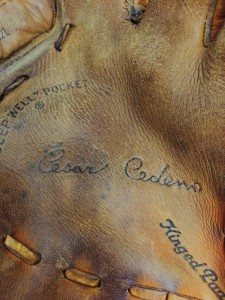 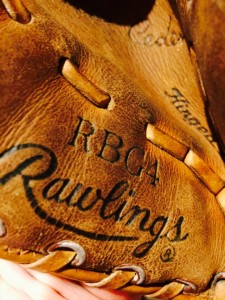 I place my right index finger on the C of Cesar and start slowly tracing the name.  The time machine kicks into gear. Faces and places begin to appear.

I begin in 1977, my first year of little league baseball.  Early indications are a hall of fame career as an infielder is unlikely. Some kid laughs at my green Wilson baseball glove.  It is a special glove.  My grandfather gave it to me.  My brother and I are likely the only players in Northwood Little League history with army green gloves.  I move my finger to

and travel to 1979. The greatest little league coach of all-time, John Phares, discovers my secret: I have a knack for catching fly balls.  He makes me an offer I can’t refuse: Be a full-time player as an outfielder or a part-time player at third base.  On to

It is 1980. I’ve outgrown my little green glove and start using my coach’s son’s glove – a large Rawlings RBG4 Cesar Cedeno autograph model – perfect for roaming the outfield. Officially, I’m now a centerfielder, but poor Duane is too slow and cannot field a lick in right field.  I cover his spot, too.

I see my dad taking me all over Greenville on Baseball Glove Hunt 1980.  Sam Wyche Sports World comes through.  I’ve found my own RBG4.  I can smell the mink oil used to soften the leather and break in the glove.

1981 finds me in Virginia, as part of the team representing South Carolina and Northwood Little League as 13 year-old State Champs.  We lose badly to West Virginia whose supposed 13 year-olds all have more facial hair than I can muster up now at age 47.

1982 is a dark time.  Something is out of place. I’m on the mound.  Our summer team is so bad, I’ve had to become a pitcher.  After walking the first three batters of one game, my temperament matches the late day summer heat.  I feel the umpire, Coach Tankersley, is being a tad too strict with the strike zone.    My disapproval is probably evident to everyone.  It is likely I comment he should stick to basketball coaching, his day job.  Coming up to bat is a tall, lanky kid named Tommy Eggleston, a future high school teammate.  At this point, I don’t know him very well.  Tommy does what no clean-up hitter has done in the history of baseball with the bases loaded in the first inning – he bunts.  In an unfortunate turn of events, the bunt heads down the first base line.  I race to the ball and in one smooth motion, scoop the ball and tag out Tommy at full linebacker speed, sending him head over heels into the first base dugout.  The umpire views my tag as perhaps a bit too hard.  He ejects me from the game.

1983 finds me making the Riverside varsity team as a freshman.  I play enough to letter.

1984 is next and I suspect the Riverside baseball coach is a butt head.  Choosing not to play football my sophomore year finds me losing my centerfield spot to the senior varsity quarterback who has never played outfield in his life and can barely throw due to his season-ending football injury.  That’s what happens when the football coach is also the baseball coach and you don’t play “the game”.  Suspicion confirmed. Thankfully, he moves on after this year.

1985 finds me under the lights at the Greer, South Carolina baseball stadium as starting centerfielder of the  Greer American Legion baseball team.  We play 20 games in five weeks and practice on the days we don’t play. Eat, sleep, play ball.  A little blonde hair girl starts coming to legion games. One of the best summers of my life.  Thankfully, the little blonde girl is still hanging around today, albeit with salon-bought blonde hair.

A hot Saturday in early May finds the Riverside Warriors in the losers bracket of the Peach Blossom conference tournament.  Accomplishing our preseason goal of a state championship looks grim as we must win three games that day to advance to the state playoffs, including two against arch nemesis Travelers Rest.  The magic spark that was missing all year explodes that day, and we win all three games.  The icing on the cake: As the third game drags on into the evening, Travelers Rest players are now late to their prom.  As a result, their prom dates start showing up at the game in their gowns to witness the defeat.

A few weeks later, the Warriors are playing the third and deciding game against Camden for the state championship.  Teammate Tommy Eggleston is on the mound, and I am in centerfield, with my trusty RBG4 sidekick.  We have a slim lead in the last inning, but Camden has one of the best hitters in the state at the plate, Randy Stokes.  He’s already hit one homer tonight.  I would have caught it, but the fence got in the way.

Randy crushes a line drive to the gap between left and center field.  Sorry, Randy.  Not this time. Saving the best defensive play of my life for this moment, I make a diving catch to crush their spirits and preserve our lead.  Left fielder Marc Jennings’ repeated screams of “He caught it!” are forever burned into my mind.  A couple of outs later, the Warriors win the 1986 South Carolina AAA State Championship.  I knock Tommy to the ground again in a celebration pile up.  He doesn’t seem to mind this time.

Several weeks later, and half way through summer legion season, I retire the now worn out RBG4 for a new Rawlings model, the PRO-B.  There is no autograph on this one.  I figure I need a new glove for the years of baseball ahead.  Unfortunately, the new glove only sees the final dismal 10 games of the 1986 American Legion season and a few bad days of college tryouts in the fall.  Baseball is over for me.

I pull my right hand away from the glove.  The time machine returns me to 2015, and I put the old RBG4 back in the box, next to the PRO-B that still looks new. I place the box on the shelf.  Maybe I’ll see you again next year, old pal.

For a moment, I wonder if I can still run down a fly ball – the only thing I miss about baseball.

I imagine a deserted baseball field.  The sun is just below the horizon, and the sky is turning pink and orange. Dad stands near the pitcher’s mound, with a bat in hand.

“Just one more,” I yell to him from the center of the outfield.  “Hit it in the gap. Long.”

Tossing up a ball, Dad takes one last swing and with a ping of the metal bat sends it deep into the right center field gap.  The sky is still light enough to see the ball’s silhouette as it arcs toward the fence.  I run toward the spot where I envision the ball landing.  It looks like the ball will be just out of reach, but I dive, the RBG4 outstretched…

“Dad! What are you doing? Do you want me to cut the grass or not?”

4 thoughts on “The RBG4 Time Machine”