Life’s full of surprises.  It’s an old cliche.  If I ever get my novel completely out of my head and into written form,  surprises will be a theme.  In the meantime, this is a different story about a few surprises.

Given my fondness for ’80s music, it may come as a  surprise to some that I actually count a “90s” band among my favorites – Counting Crows.  I own most of their albums.  Looks like they released an album of cover songs earlier this year, but I have not purchased it.  I guess I should check it out soon.

Anyway, in the summer of 1997, the Counting Crows were touring to support their second album Recovering the Satellites.  It had some really hard driving guitar and was a great follow-up to their 1993 debut August and Everything After.  As luck would have it, they were scheduled to come to Charlotte, NC, about a two hour drive away.  As a bonus, another favorite at the time, The Wallflowers, were the opening act.  What a combo.  My friend Bob and I decided this would be a great road trip, and we’d surprise our wives with tickets.

Unfortunately, the wives were not as excited as we were,  but they reluctantly agreed.  At the last moment, though, one of the wives had a “conflict”.  Hmmm. Well, the other wife said, ‘I’m not going if she’s not going’.

Great.  Now, Bob and I were stuck with two extra tickets.  Unable to unload the tickets at the last minute, we invited a couple of friends along.  Bummer. Double dating with Matt and Jeff, instead of the wives.

I can’t recall the reason, but we arrived at the concert late.  Traffic was a mess by now, and we missed most of The Wallflowers’ opening set.  At this point, I wasn’t too happy.  I was confident the Crows would be good, though.  Did they have a surprise for me.

The concert started out decent enough.  I don’t remember any spectacular entrance or anything, but I was finally enjoying the evening.  Do you remember MTV’s big hit series Unplugged?  This was a concert series where bands would play an acoustic music set.  Well, rival music channel VH1 had their own take on Unplugged and called it Storytellers.  Basically, the artists played  their hits acoustic and explained the concepts and inspirations behind the songs.  I really like both these concert formats – when that’s what I expect to hear.

On this night, though, the Counting Crows had a “treat” for us.  They announced they were going to tape an upcoming episode of Storytellers.  Great.  That sounded awesome.  Get this, though.  They told us they were going to practice their acoustic set right then and there – in the middle of my concert.  What?  I just paid twice as much as I should have for tickets and drove two hours for this?  I was not happy.  They proceeded to play all my favorite upbeat Counting Crows sounds slower and acoustic.  Wow.  Not a good surprise.  If I’d been at the local coffeehouse for an intimate performance, this would have been awesome.  I was in an amphitheater with 15,000 fans, though.  No way that worked for me. 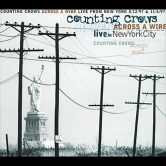 They may have finished out the concert with some plugged in tunes, but I don’t remember.  I was mad for years.  I eventually forgave them when I bought their Across A Wire: Live from New York CD.  This is a two-disk set, the first disk being a recording of their Storytellers show.  It is great, if you are in the acoustic mood. Disk two is a live concert in regular mode.  Each has its place, I suppose.

Watch the the videos below to see the difference in the two styles for Angels of the Silences:
Acoustic
[embedplusvideo height=”365″ width=”450″ standard=”http://www.youtube.com/v/TtSKnmmEkhw?fs=1″ vars=”ytid=TtSKnmmEkhw&width=450&height=365&start=&stop=&rs=w&hd=0&autoplay=0&react=1&chapters=&notes=” id=”ep3346″ /]