-“Do It Anyway,” Ben Folds Five

Growing up in Taylors, South Carolina during the late ’70’s and early ’80’s presented some challenges.  First of all, we had a rotary dial phone. While my friends could tap out phone numbers super fast on their fancy, latest tech touch tone phones, I had to put my finger in a hole on the dial and swipe the dial over to the stop bar.  Then, I’d wait for the dial to return to the resting position, and I do it again for each of the next six digits. Heaven forbid a number had nines in it. I’m pretty sure we were the last family to upgrade to touch tone.

I had an even bigger problem than slow phone dialing, though.  This was a burden that affected me many days of my young life, sometimes positively, but on certain Saturdays in November, it could be a very negative. You see, my household was a South Carolina Gamecock family living in the heart of Clemson Tiger country – Upstate South Carolina.

As it was, the late ’70’s and early ’80’s weren’t exactly the best of times for the Gamecocks against the Tigers, especially in one of the most important pastimes to Southerners – college football.  From 1975 through 1985, my Gamecocks were three wins and eight loses versus the Tigers in football, including four losses in a row from 1980 to 1983.  Life was rough. My philosophy was I pulled for two teams – South Carolina and whoever was playing Clemson.  Orange was a banned color in our house.

One bright spot in this era for Gamecock supporters was the George Rogers Heisman Trophy win in 1980.  Unfortunately, those bragging rights were short-lived as Clemson won the NCAA football national championship in 1981.  I thought we Gamecock fans would never hear the end of that one.  T-shirts, hats and bumper stickers commemorating the 1981 championship season hung around for years.  Many old pickup trucks in South Carolina still have those stickers.  Clemson coach Danny Ford could have been elected governor. 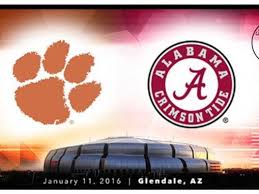 I eventually surprised a lot of people and headed off to Athens, GA for college at the University of Georgia.  While there, I was still able to pull against Clemson, as the Bulldogs and Tigers also shared a healthy rivalry.

So, here’s my dilemma.  As you’ve probably heard, there’s a national championship in college football this week – Clemson versus Alabama.  Who do I pull for, though?  I’ve just told you I’ve never been a Clemson supporter, but what about Alabama?

Unfortunately, during my four years at UGA, the Bulldogs did not play Alabama, so I didn’t get a feel for that rivalry up close and personal. Since my graduation, though, they’ve played nine times, with UGA managing to lose six of these, including the 2012 SEC Championship.  So, needless to say, I’m no fan of Alabama, either.

So, do I stay true to my upbringing, while aligning with the Southeastern Conference, and pull against the Atlantic Coast Conference and Clemson? Or do I put aside the painful memory of childhood teasing and my dislike of orange and show solidarity with so many of my friends and fellow South Carolinians?  After all, South Carolina unity has been on display lately.

It is a tough decision, but l have made up my mind.  I’ll say it for the first and maybe last time of my life: