NaNoWriMo. That’s a weird word.  I bet you’re asking “What in the world is NaNoWriMo?”

NaNoWriMo is short for National Novel Writing Month.  This is an event/contest put on each November by the folks at NaNoWriMo.org, a non-profit organization whose mission, according to their website, is to empower and encourage writing and vibrant creativity around the world.

The contest is fairly simple – create a 50,000 word novel in the month of November (validated on their website) and you earn your winner’s certificate. Everyone who validates 50,000+ is a winner.  That equates to just under 1,700 words of writing per day. To help, the NaNoWriMo website gives you a little progress tracker to input your daily word count.  You then can view a graph of your progress, or lack there of, and stats on how many words per day you must hit to get back on track.

I’ve known about NaNoWriMo for a couple of years but never attempted it.  It did seem right up my alley, though – try something that most don’t.  Plus, it was something that would probably make friends and family shake their heads and ask “Why?” Much like my running 26.2 miles on a regular basis.

This year, I decided 2015 was the year to give it a shot. So, on Oct 31st, I officially registered. I hadn’t prepared much, but I did have a story idea that had been slow cooking in my brain for a while.

Despite spending a good deal of time outlining my story on November 1st, my first few days didn’t go well, and on November 5th, I’d only written 1,228 words.  I was in a deep word deficit.  That was the bad news.  The good news was I suddenly found myself with plenty of  time to work on my novel.

Thanks to the handy dandy NaNoWriMo progress tracker, I could see for  the final 7 days I would need to average 2,5000 words per day.  I had found I could hit this number Mondays through Thursdays, but I was having problems on the weekends.  I was also struggling a bit with my story line, which slowed me down.

But….I persevered.  For days 24 through 29, I averaged just over 2,000 words per day, including almost 3,000 on day 29. Not terrible, especially considering it included Thanksgiving day and an out of town shopping trip, but it was still short of goal. With one day to go, I stood at 44,609.

For the last day of NaNoWriMo, I was looking at needing a massive 5,400 word day – almost double of any day I’d ever done and probably eight hours of writing.  And I wondered: Did I really want that winner’s certificated? I mean, no one would know if I bagged it now.   I decided, one person would know – me! And Yes!, I wanted that certificate. I hadn’t busted my tail for three weeks to come up short.  The bigger question was probably this:  Could I sit still for eight hours to complete it?

Fortunately, November 30th came on a Monday.  This meant the fewest outside distractions for me.  I started at 6:30am and after over eight hours of writing during the day (with plenty of stretch breaks and a run, of course), I managed to pass the 50,000 word mark and have my novel validated by 9:30 p.m. I had done it.  The first draft of my first novel was done. Well, almost.  I still had a bit to wrap up on the story, but I earned the certificate.  I still have a long way to go before it is a finished work, but I’ve cleared a huge hurdle.

So, what did I learn from this experience?

First, sometimes you have to quit studying and actually do.  I have been studying fiction writing for some time now.  If you didn’t know, there are conventions and formulas for modern fiction writing.  Turns out, if you don’t actually try to write a story, you cannot apply the lessons from your books.

Second, first drafts are meant to be terrible, and that’s OK.  The only way to meet the 50,000 word goal in thirty days was to write fast and furiously.  No time for editing.  That’s what the second draft is for. No editing makes for some rather interesting writing,though. Look, this first draft is probably too horrible for Lifetime…but maybe after a rewrite or two, maybe it will be at least Hallmark Channel worthy.

Third, butt in the chair works. If you wait to be inspired before writing, you’ll likely never write anything.  Knowing I had to crank out a couple thousand words a day forced me to sit down and work.  Many days I felt I had nothing, and after giving it a go for twenty or thirty minutes, I found a groove.

Fourth, being better prepared would have helped. I should have done some more outlining.  But this is a fine line between putting off writing by planning and actually doing (see point #1).

Fifth, and finally… I believe. Sometimes trying something new and different lets me know: OK, that was a dumb idea.  It’s out of your system. Move on and don’t do that again. Being NaNoWriMo winner gives me confidence that I can write fiction, and I will do it again.  Maybe not NaNoWriMo 2016 but another novel or three, for sure.  I already have ideas for number two. Now that I know how to do it, the next ones will be even better.

There you have it.  The title of my novel is Negative Split. It will likely never be published in the traditional sense, but fortunately, that is not a problem these days for authors wanting to share their work.  My plan is to have the final version completed for sharing by March 1, 2016.  Seems like a great day for the birthday of my first novel. 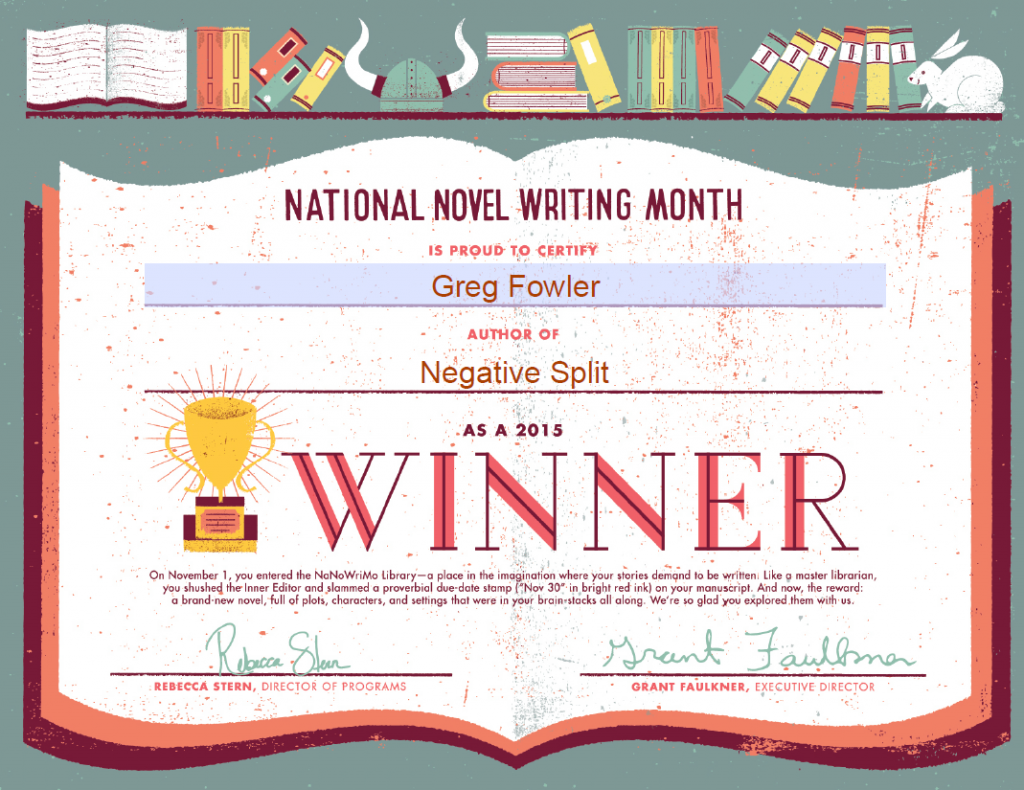 PS.  A final lesson: Diet Dr. Pepper and noise cancelling headphones can help you knock out 1,000 words in the middle of a noisy mall on the Saturday after Thanksgiving.