The one year anniversary is approaching of one of my recent experiments – Hagar, my pet chameleon.  Thankfully, this latest shot at reptile raising has been much better than previous attempts – geckos Skynyrd I and Skynyrd II  didn’t even scare the one year mark, collectively.  Maybe I learned something from the original lizards, but I think veiled chameleons are just a bit easier, except for one thing: the crickets.

Turns out, if you have a chameleon, you’re probably a cricket curator, too.  See, chameleons don’t eat dead food or veggies; they like live stuff.

This is the part of chameleon ownership that is a pain in the rear. About once a week, I stop by one of three pet stores in town which carry live crickets and buy five or six dozen.  I then dump the crickets into their own holding pen, complete with their own cricket food.  Here, they unknowingly await their fate.

Who you gonna call?

“Dad!”  My daughter called to me from the house door in the garage.

“What?”  It was Wednesday night, and I was in the garage on a quest to find the perfect throw back Thursday memento for a blog post.

“Mom needs you.”  I may have mumbled something unintelligible under my breath.

I entered the house and rounded the  corner to the kitchen.  My wife was standing off to the side. “What?” I asked, perhaps not in the nicest tone.

She pointed to the garnet rug in front of the sink.  Looking down, I saw a contrasting dark shape.  I peered closer.  We had an intruder – a skink.

The Southeastern Five-lined Skink is a common lizard in my part of the state.  These are not the green lizards with red throats you see around South Carolina.  Those are anoles.  These, at least the young ones, are black with blue tails.  They move alot like snakes, only with a more spastic wiggle.  They are fast, too. A loose one in the house was a first.

“Don’t move,” I said.  I knelt down slowly, to assess the situation.  A tiny pair of beady eyes kept steady on me.

“Do you want a cup or something?” my wife asked.

“Go get a cup from the garage,” my wife said to my son as he appeared to see what the commotion was. He went to grab a plastic cup.

I surveyed the landscape at ground  level. The under-sink cabinets and bar counter blocked a possible escape to the lizard’s right, and I was blocking the kitchen’s entrance to his front.  His best escape route was to his rear, around the corner of the bar and into the breakfast nook.  I did notice just to my left at floor level was a small gap between the dishwasher and the lower cabinet.

“Stand over there and block that way,” I told him, directing him toward the breakfast nook.

“I’m going to pull the rug toward me and see if I can trap him.”

I gently pulled on the rug.  The critter must have sensed a problem and made his move.  He darted toward me. I tried to trap him with my free hand, but the speedster made a quick right turn and disappeared into the gap and under the dishwasher.

“Crap! The one thing I couldn’t do! Why didn’t I block that to begin with?”  I said out loud.

Popping up, I opened the kitchen junk drawer and grabbed a screw driver. Returning to my knees, I removed the two screws that held the dishwasher kick plate in place.  The plate slid right off. Someone handed me a flashlight, and I shined it underneath the dishwasher. I could see wires and hoses but no lizard.  No leaks, either.  The repair I performed earlier in the year was still looking good.  I may still be a plumber yet.

“We may smell him in a few days,” my wife commented, while throwing a disapproving glance my way.

Where everybody knows your name

By morning, I forgot about my defeat.  During my morning routine, I went to feed Hagar.  I bent over to pull a tube from the cricket cage.

Now, the cricket cage is an ingenious little contraption.  It is a clear, rectangular plastic container, with a grated top for air and a hinged clear door for dropping in the crickets.  The two short sides have two square openings each with black square tubes long enough to rest on the bottom of the container and also stick out of the container a bit.  The crickets seek the dark of the tubes and climb into them.

To feed Hagar, I remove  a tube, open his cage door and give the tube a shake.  Crickets fall out of the tube.  On this morning, though, I could only scrounge up one cricket. Time to stop at the pet store after work.

Going to the pet store is starting to be a little like Norm walking into Cheers.  They don’t greet me by name yet, like my local Chick-fil-a does, but they do know I am there for crickets.  I entered the store and followed Pet Store Guy back to the cricket holding bin.

“Hmm.  Do you think you’ll have some tomorrow?”  There are two other options in town, but this place was my favorite of the bunch.

“I don’t know.  They usually come on Thursdays, but I don’t know that happened today.  Have you tried superworms?”

“A few bucks. Here take a look.”  Pet Store Guy reached up to a shelf above the cricket bins and pulled down a round container, about the size of a cat food can.  He peeled back a soft plastic lid revealing wriggly centipede-looking creatures in some sort of sawdust type mixture.

“Will a chameleon eat those?”

“Probably.  Just drop a few in the cage, like the crickets.  Not too many, though, they’re high in fat.”

Did Pet Store Guy just caution me about fatty foods for a lizard?  “Uh, OK.”

Pet Store Guy rang me up at the register.  “Sorry about the crickets.  Check back in a day or two.”

Perhaps lizards are more like humans than I thought. Hagar loved the fatty superworms.  Thanks, Pet Store Guy.

A couple of days later, I stopped again at the pet store.  Success!  The crickets were in stock.  I bought five dozen and headed home. 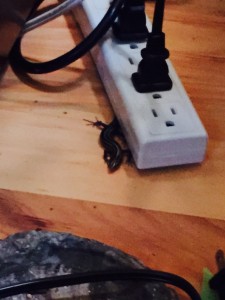 Once home, I went to the piano room, where Hagar’s cage resides.  He shrank back down behind his branch perch, trying to hide, as he usually does when I enter the room.  His little cone-shaped beady eyes kept watch on me. I crouched down to take the lid off the cricket cage.  I like to clean it out before depositing the new tenants.

Something caught my eye, on the floor near the power strip for Hagar’s lights, between the piano and the cage table.  Another pair of beady eyes was watching me.

I’d seen those eyes before. Just a few nights ago.  It was the skink!  He had made his way out from beneath the dishwasher.  I finally realized why he was here – a prison break!  He must be trying to free Hagar.  Silly skink, didn’t he realize that Hagar would not survive on the outside?  Sure, he’d likely be OK until winter if he could avoid the snakes, but after that, all bets were off.

Again, as I did a few nights before, I assessed the landscape.  This time, there was no gap in cabinetry.  Worse, there was a piano along the wall next to him and a long row of book shelves against the other wall.  I stayed still and called to my wife.

“Oh, Deee-aar! Guess who’s here to see you?”  She came to the piano room door.

“You’re little buddy is back,” and I nodded toward the power strip.

With the cup in my right hand, I made a second attempt at skink snagging, slowly moving my hands toward him.  As I neared, he darted under the piano.  This guy was good.

“Go get the small broom,” I told my wife.

Quickly, I made way to the corner between the piano and shelf. The little black and blue guy was stopped near the gap between the book shelf and the wall but out of reach due to some boxes.  Slowly,  moved a box to at least block the gap.  My wife returned with the broom.  I gently nudged the lizard. He took off  behind the piano, back toward his starting spot.

I returned to my original spot, too.  I didn’t see him under the cage table or against the baseboard.  I took the flashlight and shined it under the piano.  There he was, close to the right side wheels.  I needed something thin to block him from going back left.  The broom was too fat to slide under the piano.  A yard stick would work, I thought, but I didn’t have one of those.  I then remembered my old art class T-square tool, basically a metal yard stick with a piece of plastic on the end.  Looks a lot like a sword with no handle.

A quick trip up the stairs to retrieve the tool and I was back peeking under the piano.  He was still there.  I slid the T-square under the piano and angled it to gently “sweep” him out.  He made a dash again, but this time to the right and I was able to trap him with my left hand.  Gently, I slid a nearby pamphlet underneath him, keeping my hand on top.  A few seconds later, I was outside, releasing him into the fern near the front porch, hoping he’d survive to spar another day.