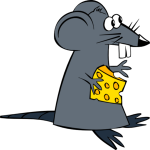 My first pet was a gift from my friend Richie.  I think we were in second grade.  Richie had a boa constrictor, which required live mice for food.  Turns out, Richie’s older sisters became too attached to one of the mice.  Saving him from a death sentence, Richie passed the little black mouse on to me.  I loved him and squeezed him and named him Jumper.

Some time later, by natural causes, Jumper’s time on earth expired.  Already having the investment in a rodent habitat, I eventually persuaded my parents to allow a pair of gerbils, Millie and Tillie, to occupy the cage (Both females. Didn’t want to start our own gerbil farm!).  Again, a pretty uneventful couple of years passed and those two passed away.  At that point, I retired from rodents, and our family eventually tried our luck at dogs.

Fast forward to the mid-2000’s.  I was now the parent of an elementary school-aged boy, and he wanted to try his hand at a pet.  Having fond memories of my rodents, my wife and I allowed him to get a hamster.  Turns out, though, our pet raising skills were more like Dr. Kevorkian than Dr. Doolittle.  Except when it comes to the 12 year-old Jack Russell terrier.   Unfortunately, he seems to be more like the Energizer Bunny.

After my son’s third hamster died much too quickly (just like the first two),  I convinced him we should try a different route.  Tired of mammals, we switched to reptiles.  After all, it makes perfect sense that if you cannot handle the easy animals, you should try something more difficult.  We purchased a leopard gecko and named him Skynyrd. As in Lyzyrd Skynyrd.  After all, Spot would have been too silly.

Well, Skynyrd didn’t fair too well.  Despite following all the how-tos, he died an early death.  At this point, with significant investment in the gecko habitat, we didn’t wait much longer before purchasing another gecko.  Skynyrd II made it to our home.  After all, naming him Second Helping would have been too silly.

Much to our dismay, II went down hill much too soon.  Even a calcium shot from the vet couldn’t keep him alive.  We were devastated and retired the reptile habitat supplies to the attic.

“Those who cannot remember the past are condemned to repeat it.” – George Santayana

Should I quit or keep going?  That’s the question I often ask myself in my pursuits.  At what point is persistence or continuing to fail just dumb?  It is a tough call.  Sometimes I think about the old quote from Edison about failing on his first 1000 attempts at creating the light bulb.  What if he’d quit at 999?

For the last 18 months or so, I had been pondering another shot at a lizard pet.  I’d ruled out geckos, but another species had my interest – the chameleon.  This past weekend, after much debate about what age and type to get,  I bit the bullet and brought home a 4-5 month old veiled chameleon. 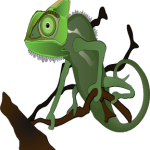 Now, veiled chameleons aren’t the bright colored chameleons you may have seen.  Those are probably panther chameleons.  Veileds are mostly green with color bands that will brighten as they mature.  They are also less expensive and supposedly a little easier to raise than some of the brighter colored panthers.  We’ll see.  Maybe the third time will be the charm.

So, here’s where you come in.  You may have noticed I didn’t tell you the chameleon’s name.  That’s because I’m undecided and need your help.   It is definitely not going to be Skynyrd III, that’s just risking bad karma…chameleon. Get it?  Never mind.

I’ve narrowed it down to four possibilities, and I’m asking you to vote on your favorite.  Just click on one of the choices below.  I’ll keep the poll open until end of day Thursday, I think, and then I’ll announce the name on Friday.

One thought on “What’s Your Name?”