In about two weeks, I will embark on my next round of marathon training, as I prepare for the Kiawah Island Marathon in December.  I registered for this way back in December when my friend Alan convinced me to take advantage of the super low early bird entry fee.

When I first took up running, I figured out entering races was the best motivation for me.  Since signing up, though, I have struggled with what training approach to take this time.  Despite a personal best in my last marathon, I began to question the training I used, which was a book/program called Run Less Run Faster.

There are two schools of thought when it comes to improving as a runner.  The first is to run more.  Makes sense on one hand.  If you want to get better at something, practicing it more, at least correctly, usually helps.  This school tends to knock the notion that you could run less and still get better.

The other thought is to cross train, meaning you don’t run as much.  You use other aerobic activities such as swimming or cycling to increase your fitness.  Think triathlete.  This is the Run Less Run Faster approach.

Many of you know that I took up long distance running a few years back, late December 2008 to be exact.   It was Christmas time, the economy had crashed and my  job future looked bleak.  So, I unburied the treadmill in the garage and started.

After a few weeks, when I still couldn’t even run three miles and motivation started slipping, I signed up for my first race.  It was a local 10K (6.2 miles) scheduled for the end of February.  So, I’d have to go from zero to 10K in about 10 weeks.

On the day of that race, it was raining.   My first race lesson learned: they go on rain or shine.   For the end of February, it could have been worse, at least it was fairly warm.  My race wasn’t pretty.   I had only run 6 miles once before, and that was just a week before.   I had a goal to break an hour. I did, but it hurt, both physically and mentally.   Being passed by a pack of high school girls at mile 5 does wonders for the ego.  Despite the rain, pain and busted ego, I was hooked on running.

It wasn’t long after that first 10K I decided to sign up for a marathon.  I had to keep going.  Unfortunately, my pursuit of that marathon led to an unwanted consequence – learning to deal with injuries as ran longer and longer distances.  After a few trips to the doctor for foot pain, I decided to change up my training. I think this was the statement that convinced me as the doc examined the x-ray:

“The good news is the two stress fractures have healed.  Not great, but I don’t think you need surgery to correct them’

I didn’t even realize I had the fractures.  I had just run through the pain.  That’s when I discovered  Run Less Run Faster.  I bought an exercise bike for the house and added cycling to my workout mix. In late 2012,  I added the final piece of the triathlon training puzzle to my mix, as I took up swimming.  Thanks to a gym near the office, I can now have a good swim workout during lunch.  In 2013,  I decided to ditch the house exercise bike and get a real road bike to ride with my son and triathlete training partner, Craig.

The Road to Boston

After using the Run Less Run Faster method with swimming as my primary cross training activity on my last marathon training cycle, I set a personal best.  I was still short of my goal of qualifying for the Boston Marathon, though.  For my age, I need to run a marathon in three hours twenty five minutes or less (3:25:00).  Take a look at the graphic below.  This is the top 11 from the 45-49 age group of the Ironman Texas triathlon back in May.  If you aren’t aware, an Ironman distance triathlon is a 2.4 mile swim followed by an 112 mile bike ride and finishes a full 26.2 mile marathon.  It is the 140.6 sticker you may have seen on cars. 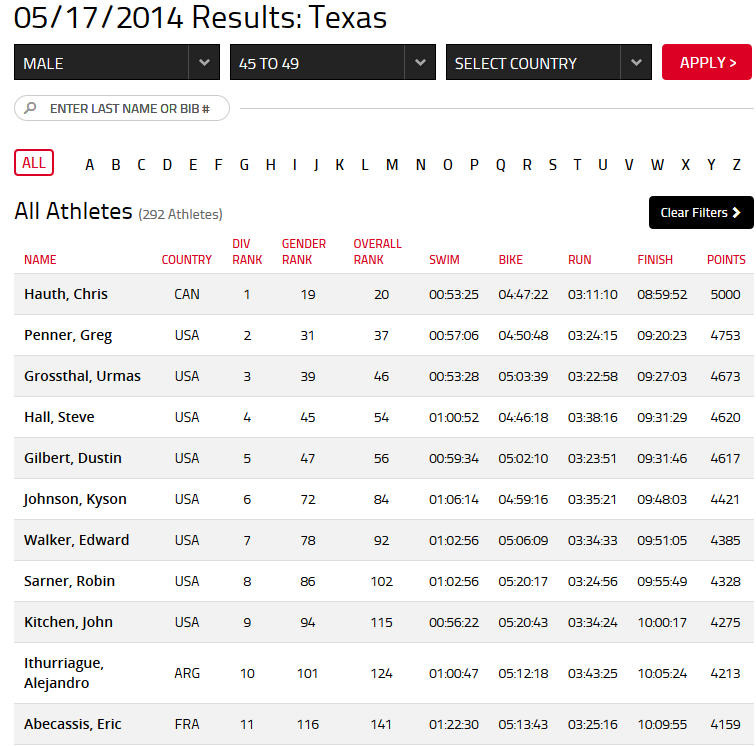 In the run column, you will see that 5 of the first 10 beat 3:25:00 in the marathon portion of the triathlon.  Number eleven just missed it with 3:25:16.  Maybe this is meaningless, but here is a group of guys who just swam 2.4 miles and biked 112 and still are better than I am in a marathon.  I think these guys are on to something.

Still, I wondered about the more running school.  Guess what? I bought a book for that, too, and studied it.  The training plans for that  took the weekly run mileage over 40 miles per week and some weeks up close to 60.  I currently do 20-25, and the Run Less Run Faster max is around 30. I even upped my mileage a few weeks this summer to experiment.

I then looked at my work schedule and other commitments for the near future.  For right now, the Run Less Run Faster program works best with my body and schedule.  So, I’m going to stick with my triathlon style training.

Be careful who you hang out with.  Your parents probably told you that. After swimming the past 20 months and cycling on the road for over a year, I finally entered a triathlon.

My Ironman finisher training partner Craig wanted to go to Charleston and check out the Charleston Park and Recreation’s sprint triathlon series. My son, the budding triathlete, wanted to do it as well.  My old high school buddy Mark was also entered.  Sounded like a party.  I decided to do it. This particular sprint triathlon consisted of a 600 yard open water swim, 12 mile bike ride and a 5K run.

Turns out, this wasn’t a party.  It was actually much tougher than I anticipated.  I figured after the dozen or more half and full marathons I’ve done plus the current weekly long bike rides and runs (usually 2+ hours each ) I do, I wouldn’t have much trouble with an hour and fifteen or twenty minute race.

I was somewhat wrong there.  After the swim kicked my rear end, I had OK bike and run times, but it was tough.  Much like that first 10K, it kicked me physically and mentally.  I’m glad I did it, but I’m not hooked like I was after that first road race.

Still, I think an Ironman triathlon is in my future.  I will probably start training for it in 2017.  I’ll be 49 years old, but more frightening is that I’ll have a teenage daughter then…. 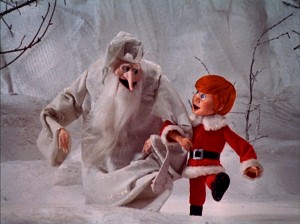 In my old running blog, I signed off POFIFOTO! That stands for Put One Foot In Front Of The Other.  I took it from the old Rankin-Bass Christmas special Santa Claus is Coming to Town.  You remember the part where Kris teaches Winter how to walk after Winter loses his powers.

Well, we’re all a lot like Winter. We’ve lost many of our powers along the way, but it is not too late to try something new.  There were a lot of people in the triathlon this past weekend who, at first glance, didn’t look like they could or should do a triathlon.  They were in it, though.  So, start doing something this week – a walk, a swim, a bike ride or even a run.  And stick with it this time.  Who knows, you might wind up swimming in a murky dog park pond with some friends and glad you did.