Sammy Hagar’s birthday was earlier this week.  This is part two of my Sammy tribute.  To see part one, click here.

In 1996, Sammy and the Van Halen brothers couldn’t get along and Van Hagar came to an end.  Ever the hard worker, it wasn’t long before Sammy released a new album, 1997’s Marching to Mars.  Sammy then set out on a solo tour to promote the album.  He actually came to the Township Auditorium in Columbia, South Carolina.

I bought two tickets.  After my wife declined to go with me (we didn’t even have kids at the time!) I tried to get my friend Bob to go with me.  No dice there, either.  So I went by myself. The Township seats less than 3000.  Apparently, the few Columbia Sammy fans couldn’t get dates, either.  Somewhere I read that 1000 people were there, but I think 750 would be closer to the truth.  Didn’t matter to Sammy, though.  He gave 100%.  I was impressed.

In 2004, Sammy and the Van Halen brothers patched things up enough to cut three new songs to go on a greatest hits album called The Best of Both Worlds.  They also decided to tour.  Since I missed out on seeing Van Hagar during the first go round,  I wanted to take advantage of this second chance.  The opening night of the tour was in Greensboro, NC, just a few hours drive north.   This time, my wife agreed to go with me.

Unfortunately, this was one of the few concerts where I felt I was owed a refund.  Not by the band, necessarily, but by the concert venue.  We had terrible seats, near the top of the lower level section where the upper level seats jutted out above us. This created terrible acoustics for us.  I’ll never waste money on Greensboro again.  I did get a kick out of seeing mini vans with the VH symbol painted on the windows. 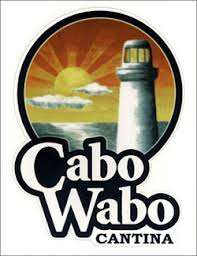 Sammy has dabbled in more than music over the years.  He and the other members of Van Halen  opened the Cabo Wabo Cantina in Cabo San Lucas, Mexico in the ’90’s.  Sammy still owns this today.

He also launched his own Tequila brand in 1996 and eventually sold off the business for over $90 million.  Today, he owns a chain of restaurants called Sammy’s Beach Bar & Grill and has introduced a new beverage product, Sammy’s Beach Bar Rum.  He is the human equivalent of the Energizer Bunny.

So what can we learn from Sammy Hagar?  Very Simple:

I have created an e-book. It is a collection of posts from my old running blog. If you like what you’ve seen on this blog, you will probably like the e-book. If you’ll fill in your email address below and hit subscribe, you’ll receive a link to download the e-book. Thanks!