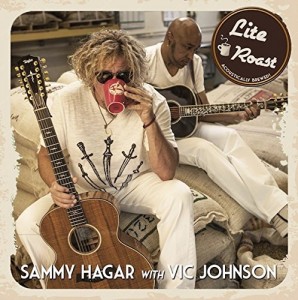 Monday, October 13  is Sammy Hagar’s birthday.  He’s 67 years young.  For his birthday, Sammy has a gift for his fans – releasing a new album this week titled Lite Roast.

There’s no new material on the album, but it is an all acoustic album – a first for Sammy.  This is not the first time Sammy has released an album around his birthday.  His October 2000 album release was titled Ten 13.

Sammy and I go way back.  My blog would not be complete if I did not pay tribute to my all-time favorite musician . 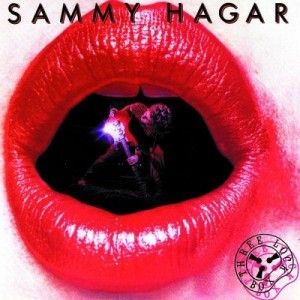 My first Sammy album had was the Three Lock Box cassette. I still have the tape.  You’re probably not surprised.   The cover featured an open mouth with bright red, lipstick painted lips and a tiny picture of Sammy playing guitar inside the mouth.

I borrowed it from my friend Jeff. I’m guessing at this point he doesn’t need it back.  Jeff always had more music than I did.  I think he was always signing up for that Columbia House record deal where you paid a penny for six  albums and you had to buy some others at highway robbery prices.

The The Lock Box album contained the single “Your Love is Driving Me Crazy”.  That song, along with another Sammy tune, “I’ll Fall in Love Again” were pretty much my high school theme songs, as I tried to figure out the opposite sex.  A vicious cycle, indeed.  Not only were the girls puzzling,  I never did figure out what a three lock box was, either. 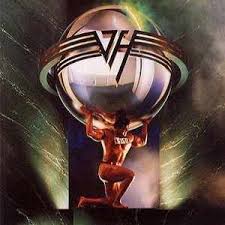 By the time my junior year of high school rolled around, Van Halen replaced Loverboy as my favorite band. I was stunned, along with rock fans everywhere, when Van Halen announced their lead singer, David Lee Roth, was leaving the band.  A few months later, my dismay turned to joy.  Van Halen announced that Sammy would be taking over the lead singer duties.  I was ecstatic.  One of the few, perhaps.

In March of 1986, Van Halen released 5150, their.first album with Sammy as lead singer.  I also received my first car around this time.  I took some of that school bus driver pay and the car down to the stereo shop.  The shop installed a new cassette head unit along with speaker upgrades.

I’d be lying if I told you I remember that 5150 was the first tape I ever played in my upgraded car.  It probably was, but I don’t remember for sure, and I don’t make up stuff in the blog! What I do know is I eventually wore out the 5150 cassette.  If I have any hearing damage these days, I can probably blame it on that album.  To this day,tracks from 5150 are staples in my running playlists.

Later this week in Part Two, I’ll share a couple more Sammy nuggets and what we can all learn from Sammy.

2 thoughts on “The History of Sammy and Me – Part One”