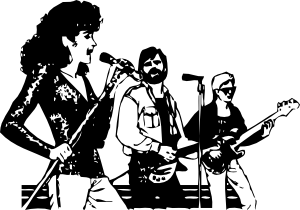 My daughter came home from school last Friday and announced she and some classmates were going to be in the 5th grade talent show.  Apparently, they’d come up with a drummer, a pianist, and a couple of vocalists to join my guitar playing daughter.  They even come up with a band name – 5 Seconds of School.  This is a take off on some band I’d never heard of called 5 Seconds of Summer.  I thought that was pretty clever.  Now, they have two weeks to decide on a song, their first cover.  From what I can tell, none of my suggestions are in the running.

Usually, long before headlining their own concerts, artists spend countless hours as  unknown opening acts.  Before that, they may have spent years in bars or coffee shops or possibly school talent shows honing their craft.  In order to fill those early concert hours, most artists play a lot of cover tunes – songs written and made popular by other artists.  By the time an artist makes it to headliner, the cover tunes have usually gone by the wayside, unless they appear as remakes on the artist’s own album or some tribute compilation album.

I’ve been lucky enough to catch a few big names (or maybe not so big names) before they were headliners.

Here are a few memorable cover tunes I’ve seen over the years:

Emerson Drive was/is (anybody seen them lately?) a Canadian band that had a few country hits in the early 2000’s.  I happened to catch them opening up for Shania Twain.  They had a really good fiddle player, as a lot of country bands do, and they put him to good use.  They really brought down the house with their version of the Charlie Daniels Band classic “The Devil Went Down to Georgia.”

Hard to believe Rascal Flatts was ever an opening act, but many years ago, I managed to catch them opening for Kenny Chesney (I think).  They played several cover songs that day, including very good renditions of Bruce Springsteen’s “Born it the USA”, Bon Jovi’s “Livin on a Prayer” and maybe the oddest one – Def Leppard’s “Pour Some Sugar on Me.”

Last year, I won concert tickets for Kenny Chesney’s show at Williams Brice Stadium in Columbia, SC.  Zac Brown Band was one of the opening acts.  I believe they also did a good version of “The Devil Went Down to Georgia” (if it wasn’t that concert, it was another time I saw them), but the highlight of all the shows was their performance of Metallica’s  “Enter Sandman.”   The lead vocals were done by one of the guitar players.  It was my favorite part of the entire evening.

Finally, one of my favorite concert cover performances was by South Carolina’s own Darius Rucker.  You’re probably aware Darius has been a solo country artist for the last several years.  One of his concerts recently brought him to the South Carolina State Fair.  My favorite song of the night was his version of Prince’s “Purple Rain.”

We Can Do Better

Every now and then an established band takes the cover song one step farther – they release a single that is a remake.  Here’s a few of the more memorable ones that are better than the originals:

Earth Wind & Fire covered the Beatles tune “Got to Get You Into My Life” for the 1978 movie Sgt. Pepper’s Lonely Hearts Club Band.

Van Halen covered Roy Orbison’s “Pretty Woman” on their Diver Down album.  The weird video was a staple in the early MTV days.

Rascal Flatts remade “Life is a Highway” for the the Disney/Pixar movie Cars.  The original was a ’90s song by Tom Cochrane.

And the one you’ve never heard of…In 1984, Sammy Hagar and Neal Schon (Journey’s lead guitarist) had a group called HSAS – Hagar Schon Aaronson Shrieve.  They had a live concert album (I had/have it, of course) and they released one single – a cover of Procol Harum’s “Whiter Shade of Pale.”  You can check it out here: https://www.youtube.com/watch?v=OojpNHvbSIs

Finally, here’s one of my favorite covers in recent years.  It wasn’t on an album or released as a single, just a one-time performance from the 2013 CMA Music Fest.  Enjoy:

What about you?  Got a good cover song story?  Let me know in the comments below.

2 thoughts on “The Cover”