Part one of Deja Vu can be found here: http://keyofgf.com/deja-vu/part-one-56-seconds/

For those who are not familiar with my son (and running coach) Miles, he is a collegiate triathlete at Queens University in Charlotte, NC. The way triathlon worked for Queens during the 2016-17 school year was like this: three competitions in September and October of 2016, eventually followed by the national championship in late April 2017.

The problem with this schedule was the long, grueling training schedule which basically encompassed the entire school year. Throw in a shoulder injury in the middle of the year, which made his least favorite leg of tri (the swim) even less loved, and we had one mentally and physically exhausted son by spring. I honestly felt like Miles would hang it up after one year.

Then, a couple things happened. First, in a tune up for nationals, Miles entered and won the Parris Island Sprint Triathlon in March. The shoulder held up OK in the swim. Second, he read a book called Grit by Angela Duckworth, which convinced him of the value of combining passion with persistence. Finally, in the collegiate national championship, Miles had one of his best races while the second-year Queens triathlon program finished 4th in the nation behind perennial powerhouses Navy, Colorado, and Arizona. The dark mental clouds had cleared and with summer break around the corner, I was anxious for Miles to perhaps take it easier and recover physically. Silly me. 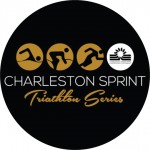 Miles came to me early in the summer, and said he wanted to do the Charleston Sprint Triathlon Series races over the summer. This is a five-race series, which not only has individual winners each race, but also has a points competition, like NASCAR, for those entering three or more events.

Miles had two main goals by choosing this series. The obvious one would be to win the series. With some success there in the past, including a win in race five of 2015, this was not a crazy goal. The other, and more important, objective was to judge his improvement over the summer.

One challenge with triathlon is “playing” a different course each event.  Different layouts, swim lengths, and bike lengths make it difficult to judge your progress.  The CSTS was different, though. All five races are held on the same course, starting and ending in James Island County Park. Fortunately, this is also one of the better spectator courses. So, I had my summer plans as well – play travel coordinator and bus driver.

On May 21st, in race one, Miles finished third. He was about a minute and a half behind winner George Moreno and about thirty seconds out of second place. It was a decent effort, but clearly he had work to do. Four weeks between races one and two gave Miles plenty of time to train. On June 18th, he showed some improvement and even had the best run time of all the participants in race two. George still edged him out, but only by 30 seconds this time. It was only three weeks until race three, and Miles went back to work.

I was enjoying a nice Sunday afternoon, actually paying a bit of attention to my long-neglected yard. Being a marathon runner will do that do a yard. I had just cut the grass because my summer lawn boy was off on a bike ride. I had moved on to doing battle in the driveway with an uncooperative chain saw because some arch nemeses sweet gum trees needed to be taught a lesson. Apparently, that wasn’t going to happen. If only it was due to the saw not working.

I turned around at the sound of my wife, Angie, calling for me and coming out of the back door, moving quickly. She held a phone to her ear and had a look on her face that I knew was not good. I had a sinking feeling, and, perhaps, I said another questionable word. Angie held the phone out to me and in a shaky voice said, “He’s been hit again…”